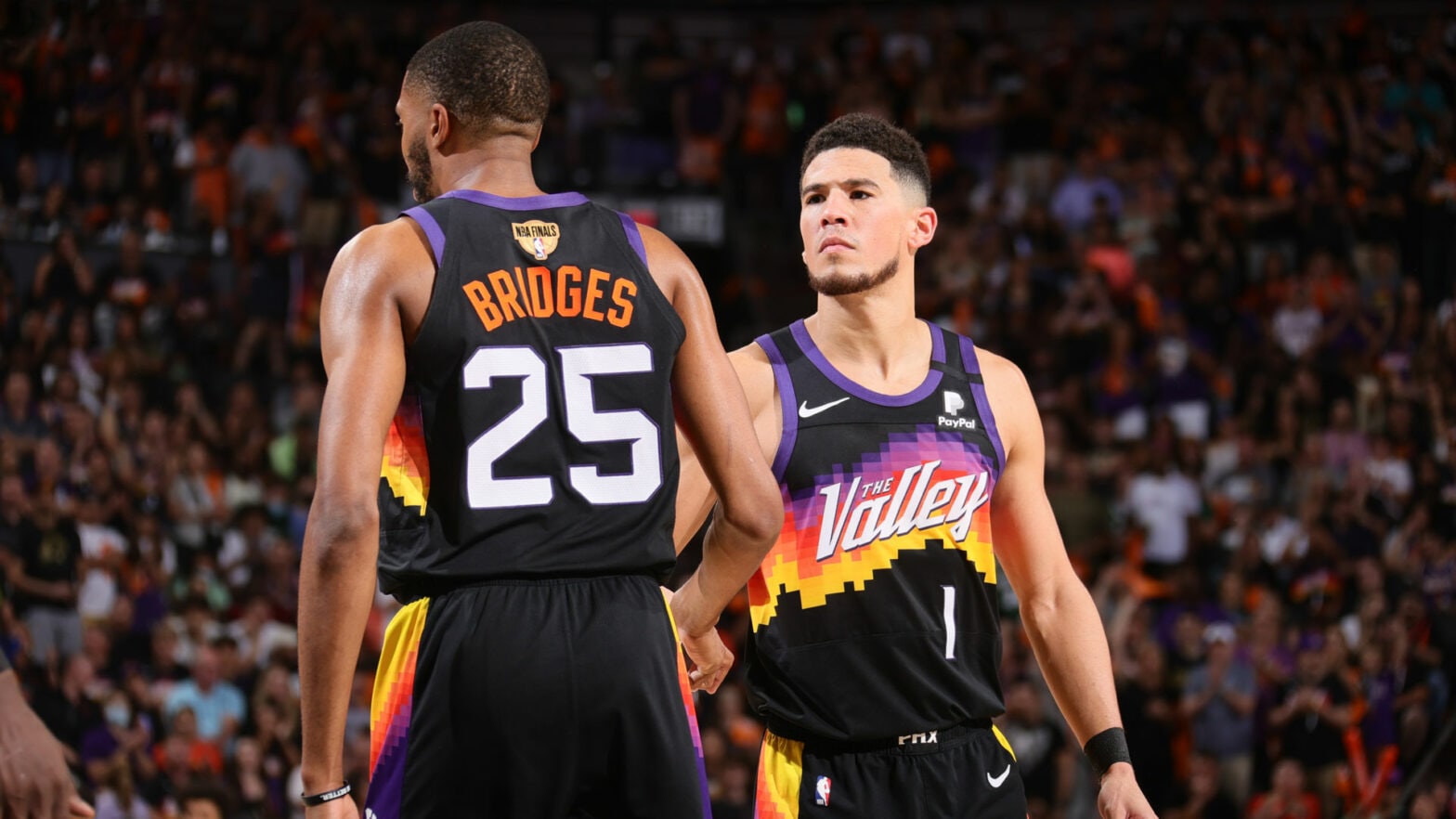 Behind a brilliant Chris Paul performance, the Suns struck first in the 2021 NBA Finals with a 118-105 win on Tuesday. The Bucks find themselves down 0-1 for the third straight series; how will they respond tonight? Can the Suns successfully defend home court and emerge with a 2-0 lead as the series shifts to Milwaukee for Game 3 on Sunday?

Here are 24 thoughts on Game 2 as it unfolded in Phoenix on Thursday night.

24 — The Captain makes his pick … although he may be slightly biased here.

Kareem is taking the Bucks in 6 🦌

23 — Jrue Holiday comes out aggressive, with three shot attempts in Milwaukee’s first five possessions. The Bucks need to have the Holiday that closed out the Hawks in the East finals.

22 — We get early evidence again that Giannis Antetokounmpo’s knee looks just fine. He opens the scoring for Milwaukee with a coast-to-coast fast-break dunk.

Giannis opens the scoring in Game 2 with the one-man fastbreak on ABC! #NBAFinals presented by YouTube TV pic.twitter.com/74F3s7Ak32

And shortly thereafter throws down this putback dunk. Giannis has two dunks and a block in the opening two minutes of the game. A great sign for Milwaukee as there was only one day off between Games 1 and 2. Keep in mind there will be two off days between each of the next four games.

Giannis cleans it up & throws it down!

He’s got 6 quick.. @Bucks up early in Game 2 on ABC. #NBAFinals pic.twitter.com/gLZk0EHQxQ

21 — Jae Crowder knocks down a 3 for his first bucket of the series after shooting 0-for-8 FG, 0-for-5 3P in Game 1. He still finished with a team-best plus-19 in the Suns’ win, but the Suns will need his shooting as well as all the little things he brings every night.

20 — We’ve all heard of the phrase “live by the 3, die by the 3,” well the Suns are “surviving by the 3” right now. Six of their first seven baskets have come from beyond the arc to keep them in the game as Milwaukee comes out strong.

19 — While the Suns can only make shots from outside the 3-point line, but Bucks are dominating inside to open Game 2. Are either of these things sustainable?

Sixteen of Milwaukee’s 21 points have come in the paint.

18 — Bucks lead 29-26 at the end of the first quarter. Suns finish period shooting 8-for-14 from deep (one shy of the Finals record for 3-pointers made in a single quarter) and just 1-for-9 on 2-point shots. The Bucks were the polar opposite as they only made two 3-pointers, but scored 20 points in the paint in the game’s first 12 minutes.

The Suns finished with 8 threes in the first quarter, the 2nd-most in a quarter in Finals history.

But the Bucks won the paint battle 20-0, tied for the 2nd-best diff in any playoff quarter over the last 25 seasons. pic.twitter.com/YUEdq7j2j3

Bucks lead by only 3.

8 1st quarter triples for Phoenix.. the #NBAFinals record for a quarter is 9.

17 — The Suns’ 3-point barrage continues in the second quarter as Cam Johnson knocks down his second triple from the corner.

If Cam Johnson is open for a corner 3, he shouldn’t have to shoot it, the Suns should just automatically get the 3 points.

Will these Finals 3-point records be challenged tonight?

16 — For the second straight game we get an incredible blocked shot by the Bucks. After Giannis’ LeBron-esque chasedown block in Game 1, we get Jrue Holiday rising up to deny Devin Booker’s fast-break dunk attempt.

just an absurd block from jrue that gets immediately erased. this game is awesome

15 — Love seeing Holiday applying the full-court pressure as the Suns bring the ball up court. He’s trying to disrupt the rhythm and force the Suns to start their offense later in the shot clock.

dribbling the ball up the court against Jrue Holiday should be one of jigsaw’s games in the next Saw movie.

Don’t love seeing Devin Booker take another hit to the face as he’s been playing without the protective mask after suffering the broken nose last series. No ill intent by Holiday, but it hurts just the same for Booker.

14 — The Suns are begging Giannis Antetokounmpo to shoot 3-pointers; Ayton has his feet in the paint as Giannis is beyond the arc. Giannis takes the shot and misses, but Brook Lopez is there to clean it up. After the Bucks were held to just three second-chance points in Game 1, they already have 14 tonight and we’re only in the second quarter of Game 2.

13 — Awesome footage of Giannis trying to rally his guys, he’s not trying to go down 0-2 in this series like they did against Brooklyn in the second round.

Giannis bringing that intensity in the huddle 🗣

Need that leadership in the Finals. pic.twitter.com/HLBeajsc1K

12 — After the Bucks tie the game at 41, the Suns respond with an 8-0 run to force a Bucks timeout. Milwaukee comes back with the Giannis at center lineup as they look for a spark to close out the first half. When you go small, sometimes you have Holiday as your rim protector, but check out this block by Jrue on Ayton.

But just like Holiday’s previous highlight-reel worthy defensive play, the possession ends with points for the Suns as Ayton wins the jump ball and it leads to another corner 3 for Phoenix, this one from Mikal Bridges.

11 — Here’s a play every high school coach will show his team to stress the importance of passing and teamwork. Great scrambling defensive effort by Milwaukee, but Phoenix makes 10 front-court passes that lead to an and-one for Ayton at the basket. Incredible play.

The Suns offense was rolling in the 2nd quarter. pic.twitter.com/6eV2iBX87m

10 — The Suns dominate the second quarter — 30-16 — to take an 11-point lead into halftime. Who had Mikal Bridges as the game’s leading scorer at halftime with 13 points?!

This is how you close out a half:

The Bucks took a 9-point lead at the 5:05 mark of the 1st quarter, their largest lead in the series to date.

It was all Suns the rest of the 1st half. pic.twitter.com/xXmYnzCMRN

9 — Great stat offered by Mike Breen during the broadcast — the Suns are 12-0 in the playoffs when they lead by double-digits at any point in the game. Will that trend continue and push that stat to 13-0 after another 24 minutes of action?

8 — Here comes Giannis! He knocks down a pair of free throws, hits a pull-up 3-pointer on the next possession, follows that with a fast-break drive to earn another trip to the line and hits both free throws again. Suns’ lead down to eight points after a personal 7-0 run by Giannis in just over a minute of play.

7 — Sue Bird is in the building. Two point gods in the same arena. One more time for the Spider-Man pointing at Spider-Man meme.

6 — The Suns are answering every Bucks push to get back into this game. This time it’s Devin Booker with a 3-pointer to get the lead back to 10 points with 4:11 to play

Booker really likes that Middleton matchup. He goes early when he sees KM in front of him.

5 — The Bucks get unbelievable third quarter from Giannis with 20 points (the most in a Finals quarter since Michael Jordan in 1993), but were unable to make a dent in Phoenix’s lead. The Suns led by 11 at halftime and by 10 at the end of the third.

Bucks not named Giannis are shooting 33.9% through three quarters

Another note on Giannis — he just joined some elite company as he’s now posted his 10th game this postseason with at least 30 points and 10 boards.

Giannis Antetokounmpo has his 10th game this postseason with at least 30 pts and 10 reb.

He joins Shaquille O’Neal, Hakeem Olajuwon, Elgin Baylor and Kareem Abdul-Jabbar as the only players with 10 such games in a postseason. pic.twitter.com/UvGmKyzKxM

4 — The Bucks bring back their small lineup in the fourth quarter as they try to break through, but the Suns continue to have an answer each time the Bucks get close. Giannis gets a brilliant block, leads to a transition bucket for Milwaukee to cut the lead to five. The Suns answer right back with a layup by Ayton and a 3 by Booker and the lead is right back to double digits.

Booker has caught fire and hits another 3-pointer out of a timeout to push the lead to 13 and give Booker 31 points for the game.

🚨 7 threes for Devin Booker.. the @Suns are up to a franchise #NBAPlayoffs record 19 threes! 🚨#NBAFinals on ABC

It even got Jeff Van Gundy quoting Jay-Z lyrics.

3 — The Wired/Mic’d up segments that are shown during the game broadcasts can be hit and miss at times, but this one right here with Monty Williams and Deandre Ayton is great. Always think back to the one with Steve Kerr and Steph Curry, where Kerr shows him the box score and how Curry was dominating plus/minus despite having an off shooting night. Here Williams challenges Ayton to play at the level that’s he’s established for himself during this Finals run.

SOUND ON for this Monty Williams coaching moment with Deandre Ayton. 💯#NBAFinals on ABC pic.twitter.com/qPqD2Y4Ryd

2 — The Suns drain their 20th 3-pointer to tie Golden State for the second-most in a Finals game, and essentially put this game away.

I’ve already used a few of his tweets tonight, so I might as well keep going with the J.A. Adande-isms and call this a Mikal Bridges podium game as he finished with 27 points on the night.

The Sun take Game 2 and are just two wins away from their first NBA Championship!

Mikal Bridges played one of the best games of his life. Showed exactly why he’s more than a “3-and-D player” with his skill off the dribble, scoring 27 points. And on defense, he made life hell on Khris Middleton. Seemed he was in his head. Outstanding performance for the Suns.