The Jr. NBA and Positive Coaching Alliance today announced the eight semifinalists for the 2021 Jr. NBA Coach of the Year award, which recognizes a youth basketball coach who is making a positive impact on local boys and girls by demonstrating outstanding integrity, character and leadership. 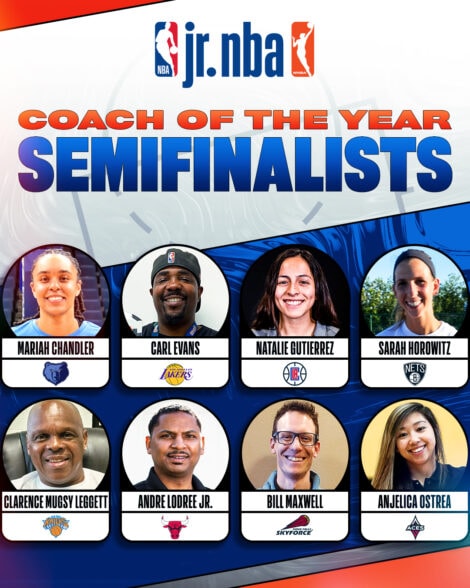 Each participating NBA, WNBA and G League team nominated a local coach, who was entered into the national Coach of the Year selection process for consideration. An evaluation led by the NBA, Jr. NBA and Positive Coaching Alliance then narrowed the pool of nominees down to eight national semifinalists. This year’s semifinalists were nominated by the Brooklyn Nets, Chicago Bulls, Memphis Grizzlies, New York Knicks, Las Vegas Aces, Los Angeles Lakers, Los Angeles Clippers and Sioux Falls Skyforce. An executive panel of judges, an interview, and a public fan vote on social media will now determine the top three finalists and the 2021 national Jr. NBA Coach of the Year winner.

Below are the eight nominees. 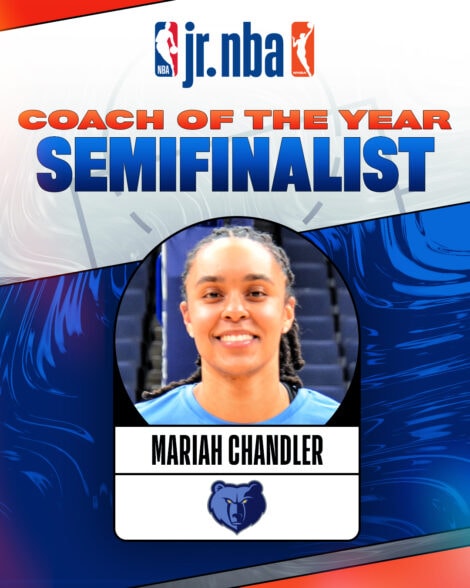 Mariah Chandler, a former national champion at Baylor University, has utilized her athletic prowess and energy to teach the game to youth players. She’s currently working in basketball operations for the Grizzlies and has been heavily involved in the organization’s youth basketball efforts.

Chandler’s highlights as a coach include stints with Cheyney University, North Greenville University, The Galloway School (HS) and Skills Factory & Peak Performance (AAU). Over the last year, Chandler has played a key role in the Grizzlies’ virtual content efforts, leading Jr. NBA at Home sessions, Summertime Virtual Workouts, and a Skills & Drills tutorial series. She also volunteers with the Ronald McDonald House and Habitat For Humanity and has traveled abroad to Kenya, Zimbabwe, and Brazil for basketball-based mission work using the game to address pertinent social issues.

Chandler has displayed the ability to teach the game on the court, supporting the development of G League hopefuls and NBA players alike. As a coach, she’s been applauded for her mentorship, embracing change and hard work. She tells her young players to “show the world that you’re prepared for anything.” 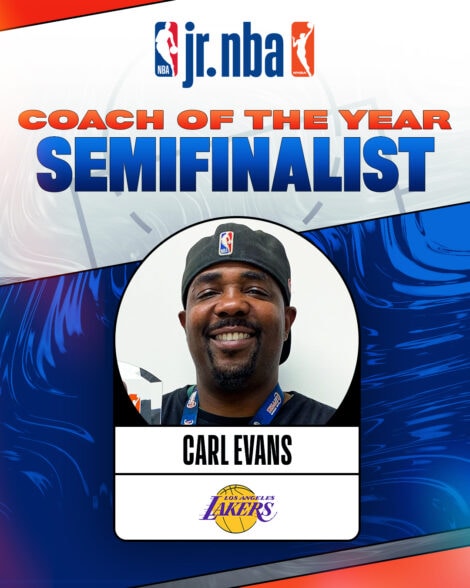 Carl Evans is a longstanding coach and leader within the South LA community, specifically in the city of Watts. Evans works tirelessly with his students to provide them proper access to physical education and sporting equipment. He’s shown a willingness to invest his own resources and time (14+ hours a day) to support his players. Evans also doubles as the middle school’s Athletic Director and works with After School All-Stars, a Junior Lakers community partner.

Evans’ coaching philosophy emphasizes shaping character and developing relationships. Early on in his coaching career, he embraced his role as a positive male influence on young men of color and made a commitment to serving as a mentor to them.

Evans is committed to social justice reform and has used the game of basketball to bridge the gap between local law enforcement and his students from diverse communities around LA. Evans’ former students speak highly of him, noting he’s helped shape their lives long after graduation. 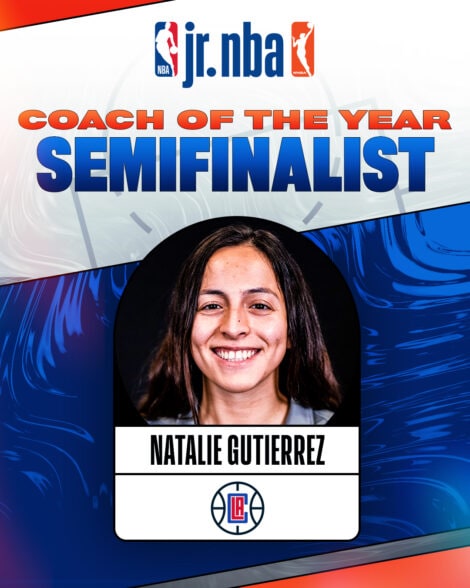 Natalie Gutierrez is a Peace Players Program Coordinator, dedicated to finding ways to empower youth in the LA community. Not only does Gutierrez handle coaching at the high school and college level, she has also directed Nike clinics, coached in the Jr. Drew league and led a team for Kobe Bryant’s Mamba League.

Gutierrez continuously looks for opportunities to engage youth in undeserved and underfunded communities. Her devotion to the game and personal growth has led her to planning “Her Time To Play” clinics and panels annually, in which she works with girls from the Boys and Girls Club of LA. During those clinics, she’s impressed the Clippers organization by organizing off-the-court activities for players including journaling, meditating, or creating confidence-building exercises.

Gutierrez’s on-court philosophy centers on balancing hard work and fun. She’s known to lead by example and leaves it all on the hardwood during her workouts. 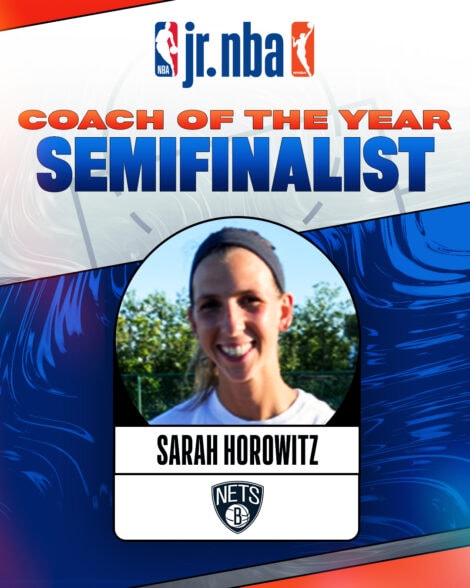 Early on in her coaching career, Sarah Horowitz has established herself as a mature, distinguished coach. She started coaching young girls from Brooklyn’s Midwood sector while in college and quickly gained experience as an assistant high school coach at every level within her alma mater (five teams total). Horowitz also hosts her private clinics at a local community program called “Little Ballers” which oversees hundreds of girls ages three and up.

Horowitz instills self-belief and confidence in the young girls she works with on a day-to-day basis. She encourages players to have fun on the court and reminds them to never give up. She takes pride in the relationships she has built with her players as many feel comfortable coming to her for support as a mentor.

At a young age, Horowitz plans to get more involved with the Nets organization and figured to impact countless youth in the Brooklyn area moving forward. 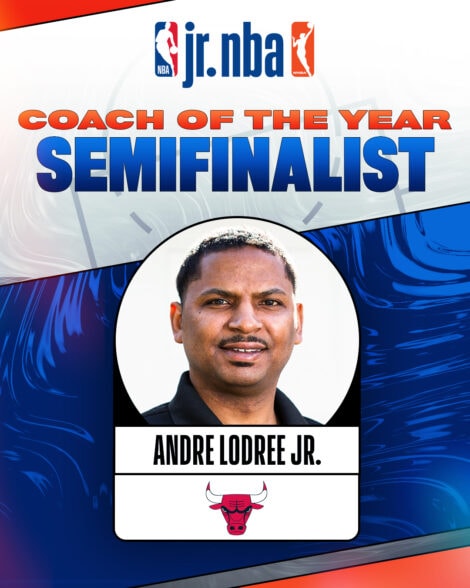 Lodree Jr. hammers home three different coaching themes: have fun, “can’t” doesn’t exist and always hustle. He knows basketball isn’t everything and that there’s plenty of life ahead beyond the game. He’s imposed classroom expectations on all his athletes – they must achieve stable attendance, participation and grades in all classes. Lodree Jr. connects with his players mentally, he challenging them to think about why they’re participating in drills and what they hope to get out of them.

During the pandemic, Lodree Jr. worked with his nonprofit to distribute over 900 Athletic Care Bags that included a basketball, jump rope, cones, water bottle, workout plans and nutrition education. One of his main goals as a basketball coach is to unite youth from different ethnic and socioeconomic backgrounds all around Chicago. 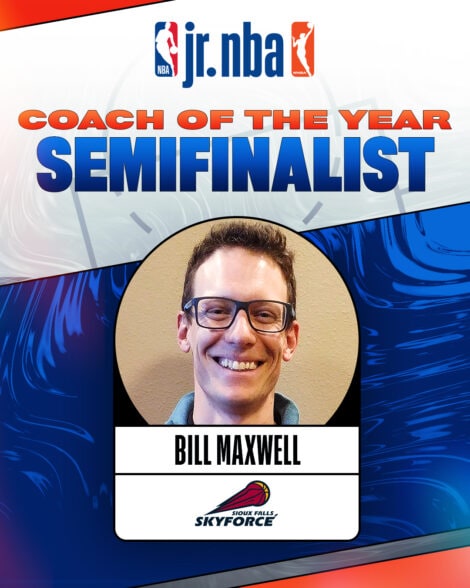 Bill Maxwell serves as a referee for the local middle school and JV basketball program at Parkston High School. He also allocates his time away from being a local businessman and independent insurance agent to volunteer as a coach during weekend practices and tournaments for boys and girls in the Sioux Falls area.

Maxell is an advocate for two Jr. NBA philosophies, leaning into the ELM Tree (Effort, Learning, Mistakes) and ROOTS (respect for Rules, Officials, Opponents, Team and Self). For application on and off the court, Maxwell believes in contribution to a group, whether on a team, at home, in the classroom, or in the community.

As the head of a foster household, Maxwell often relates his parenting experience to coaching. He understands evaluating youth and utilizing fundamentals to develop their skills and personal characteristics. Maxwell’s ongoing positivity and commitment to young athletes have set him apart in the local community. 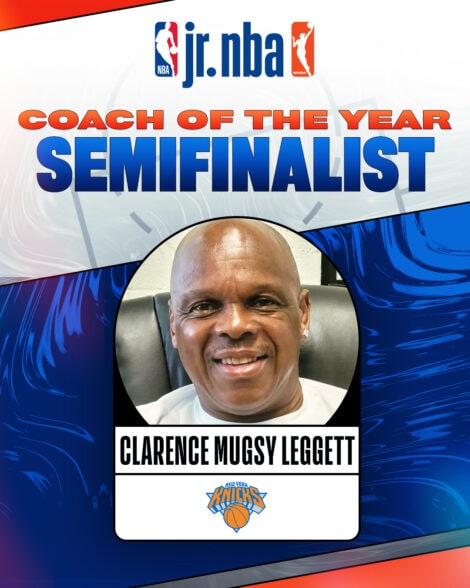 Clarence Mugsy Leggett has spent the past 30 years of his life uplifting young athletes and families in the Baychester area of the Bronx, which has some of the highest crime and high school drop-out rates in the nation. Leggett grew up a small, tough-nosed kid from inner NYC, and was determined to better himself and those around him. He began coaching at 15 years old and never looked back.

Leggett has over 1,000 kids in his Wizkids Basketball program and understands it takes a village to teach them. The program emphasizes building life skills, and he’s inspired by the personal development of his athletes as they go on to graduate from college, start successful careers, raise families and come back to mentor children in the area. Leggett could have expanded his program elsewhere or moved out of the Bronx, yet he continues to mold positive social change in the borough.

Leggett’s been instrumental in providing proper access to basketball and physical education to young people in Baychester despite the disadvantaged households they come from. He is known for being a remarkable father figure to so many, while leaving no child behind. His motto is “One Team, One Family.” 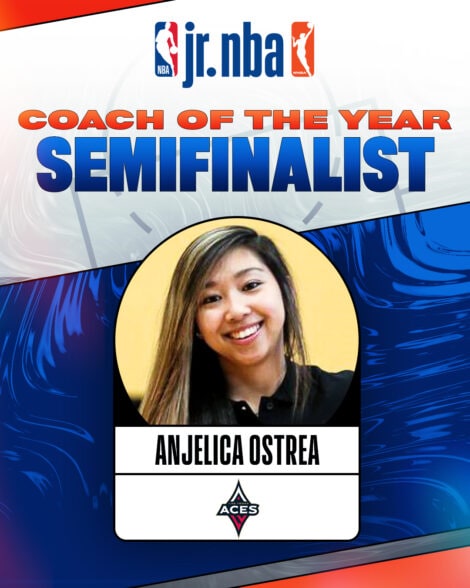 Anjelica Ostrea created Girls Youth Basketball (GYB) with the primary purpose of building equal opportunities and athletic growth for young women in the Las Vegas area. Ostrea’s GYB website states “Girls simply do not receive the same positive reinforcement in sports as boys do. At GYB we aim to develop basketball skills, sportsmanship and self-esteem through our coaches, gym officials and organizers.”

Ostrea, known by her players as “Coach Anjee,” stands out in a packed gym of 400 girls as someone who truly cares about every single participant and finds genuine happiness in their success. Ostrea’s program caters to players at all levels and was a finalist for the Jr. NBA Program of the Year Award a few years back.

Relationship building is one of Ostrea’s strong suits, connecting with female advocates such as Sheryl Swoopes, Cynthia Cooper and Skylar Diggins-Smith. These influential athletes have taken time to speak to the GYB program to help guide its players. Ostrea always looks for ways to motivate her girls and she wants them to feel they’re every bit as special as their male counterparts.