Last season, including the playoffs and Super Bowl LV, NFL quarterbacks attempted 18,983 dropbacks, per Sports Info Solutions. Of those 18,983 attempts, either from under center or pistol or shotgun, quarterbacks threw from zero- through three-step drops 11,540 times. So, when opposing quarterbacks are running quick game 60.8% of the time, your options as an edge defender are relatively limited as opposed to previous eras when quarterbacks were more inclined to grip it and rip it. Rumbling all the way around the edge is still one way to go, but you’d best get there in a big hurry.

The increasing popularity of the quick game has made interior pressure more important than ever, something we discussed when our list of the top 11 interior defensive linemen went up. So, when you’re an edge defender, you might find yourself aligned inside more often these days, so that your coaches can scheme up your speed and power inside the tackles. Ends like Za’Darius Smith and Cameron Jordan, both high on this list, have long been able to take quarterbacks out of the play from multiple gaps.

If you’re a total edge guy like Tampa Bay’s Shaquil Barrett — this year’s top edge defender on our list — you’d better be able to stunt to the open gap, work your inside counter, and convert speed to power to force the offensive tackle to give up ground in a straight line. The importance of the “shortest distance” theory has never been more clear for edge defenders, and here are the NFL’s 11 best coming into the 2021 season.

(All advanced metrics courtesy of Pro Football Focus and Sports Info Solutions. PFF counts half-sacks as full sacks, and that is often reflected in our pressure totals). 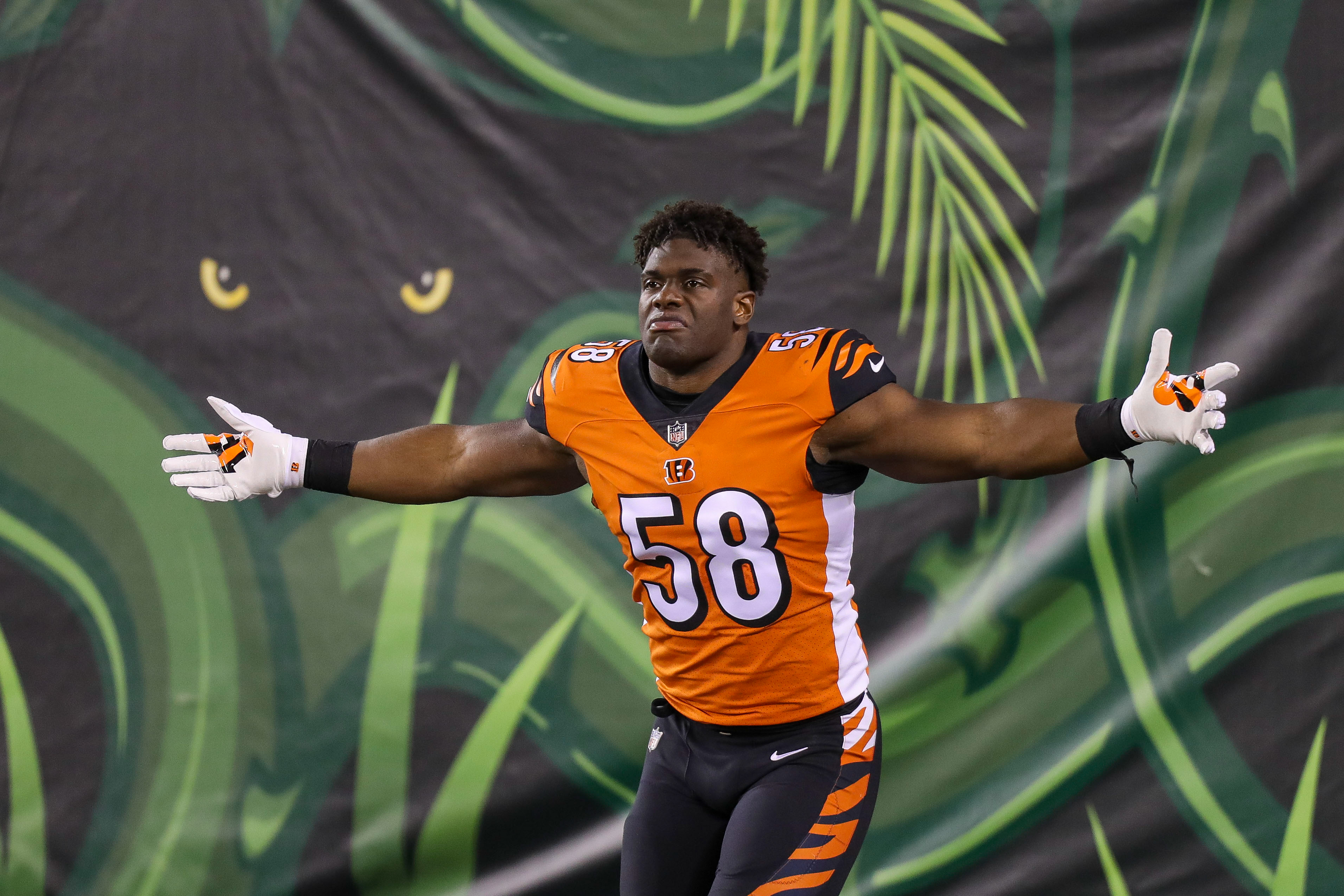 The Jets signed Lawson to a three-year, $45 million contract in free agency to bolster a pass rush in desperate need of assistance, and based on the metrics and tape, it was a wise addition to new head coach Robert Saleh’s defense. Last season, Lawson was one of the force multipliers on a really bad Bengals defense — only Shaquil Barrett, T.J. Watt, and Emmanuel Ogbah had more total pressures among edge defenders than Lawson’s 64. It may not have resonated because Lawson had just six sacks (along with 24 quarterback hits and 34 quarterback hurries), but the tape will show you that Lawson is perfectly capable of messing up passing plays as well as anyone at his position.

Carl Lawson with what might be the effort sack of the 2020 season. Jets got themselves a baller. pic.twitter.com/Q5cehcaBtp 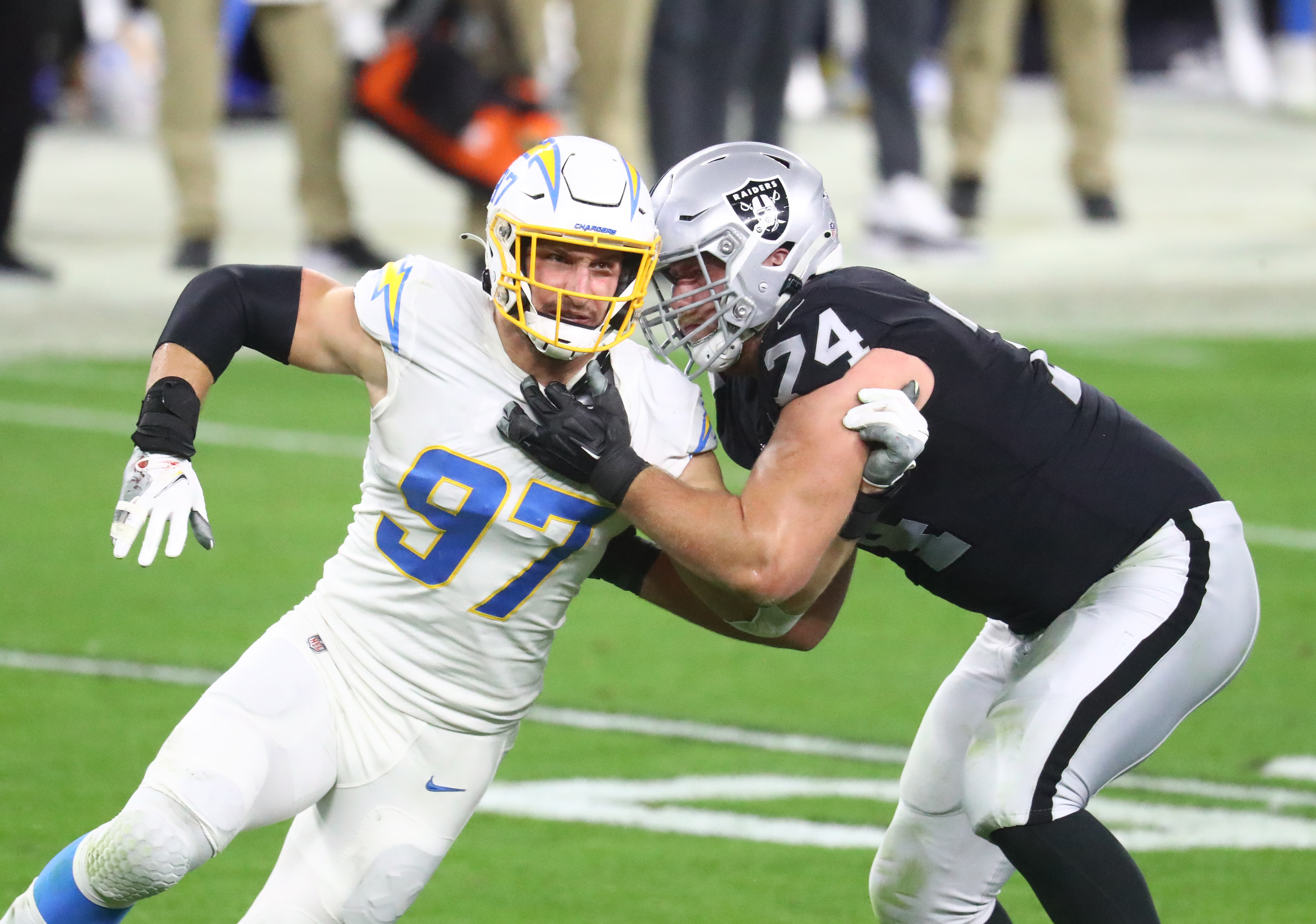 It seems that when it’s time to discuss the best edge defenders in the NFL today, Bosa’s name doesn’t come up as often as it should. Perhaps that’s because Bosa’s name is now doubled in the NFL with the ascent of his younger brother Nick. Perhaps it’s because he had just eight sacks last season, or because the Chargers’ defense wasn’t exactly a world-beater in 2020. But Bosa has amassed 20 sacks and 133 total pressures over the last two seasons, and he possesses a rare combination of speed, power, technique, and fluidity to either side of the blocker that makes him excessively tough to deal with on a down-to-down basis. Saints right tackle Ryan Ramczyk is probably still asking himself questions about the spin move Bosa gave him in Week 5.

Ryan Ramczyk is one of the NFL’s best offensive tackles. No question about that. But here, Joey Bosa just puts him through the spin cycle. pic.twitter.com/hPvkUR6ul6 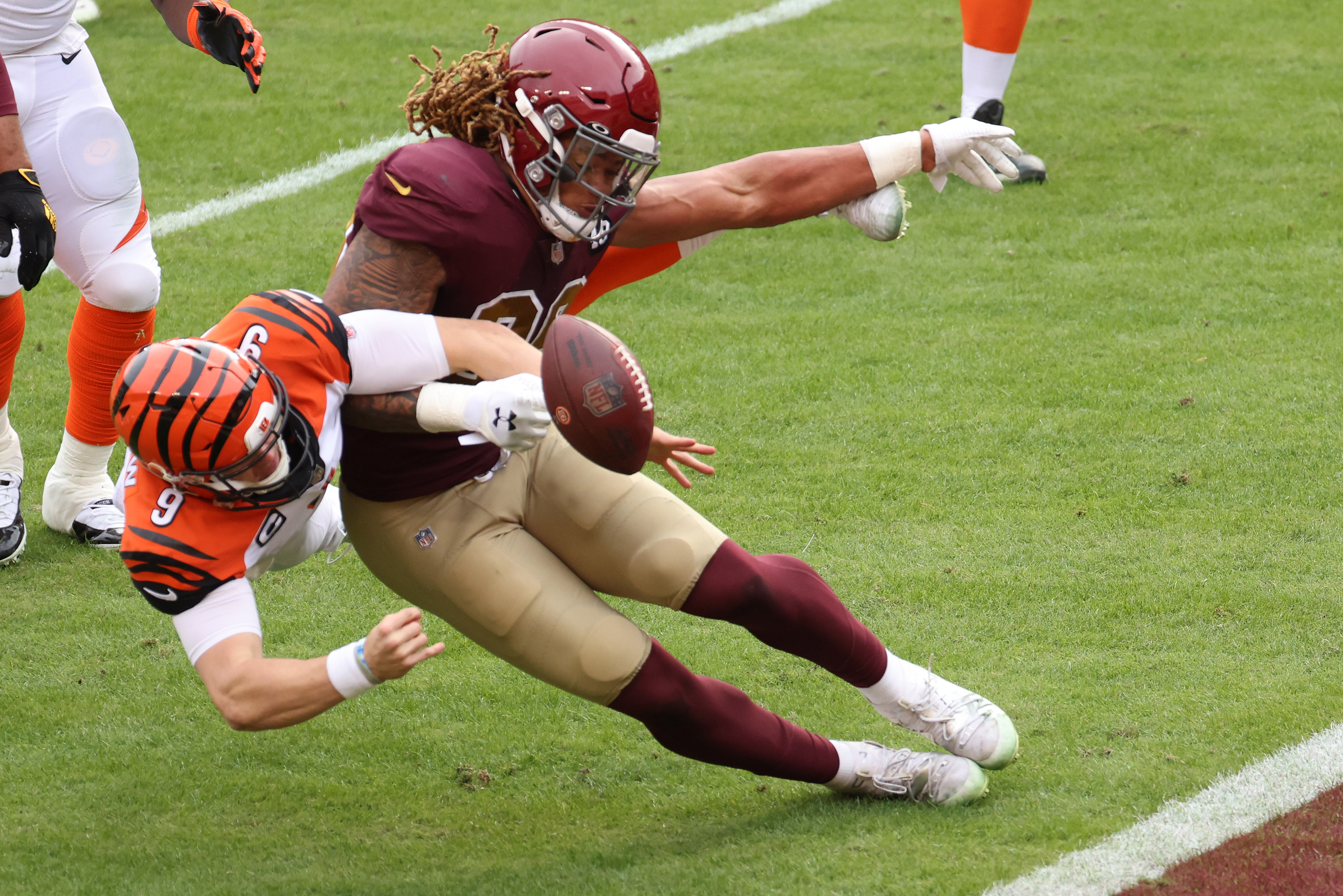 Washington selected Young with the second-overall pick in the 2020 draft based on an athletic profile that has few peers. That profile showed up in Young’s rookie season, when he totaled six sacks, six quarterback hits, and 30 quarterback hurries. There were times when Young, even as part of a defensive line with five former first-round picks, found that his technique wasn’t quite up to the level of blocking he discovered in the NFL. But there were more than enough “wow” moments to speak to his potential over time, and when he did put it all together, Young was everything his NFL team hoped he would be.

Chase Young’s athleticism didn’t always turn into production in his rookie season, but when it did… hoo, boy. pic.twitter.com/GEgDz7irhZ 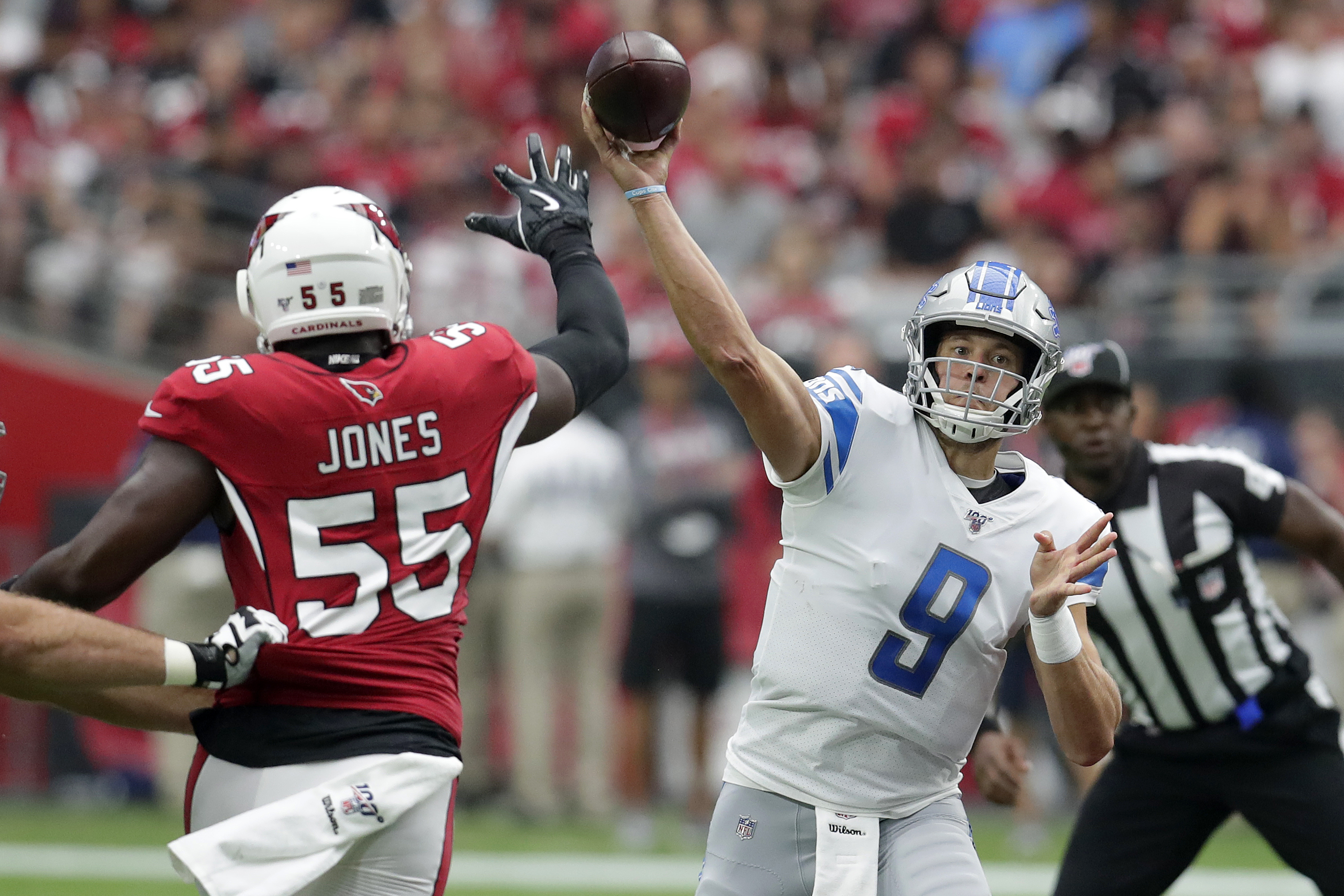 NFC West quarterbacks had an easier time in 2020 than they did in 2019, because Chandler Jones missed all but five games and 286 snaps due to a torn biceps. But even in limited duty last season, Jones showed that he was still the same guy who put up 19 sacks and 75 total pressures in the 2019 season. Jones is now 31 years old and in the final season of the five year, $82.5 million contract he signed in 2017, so while it’s understandable that the Cardinals have a wait-and-0see attitude about a contract extension, Jones had a sack and 10 total pressures in just 166 pass-rushing snaps last season, and the tape shows that he’s still got it. Another huge season, and Jones could take it all the way to the bank all over again.

Who missed Chandler Jones in 2020: The Arizona Cardinals.

Who did NOT miss Chandler Jones in 2020: Eric Fisher, and every other offensive tackle. pic.twitter.com/XlHmYH429f 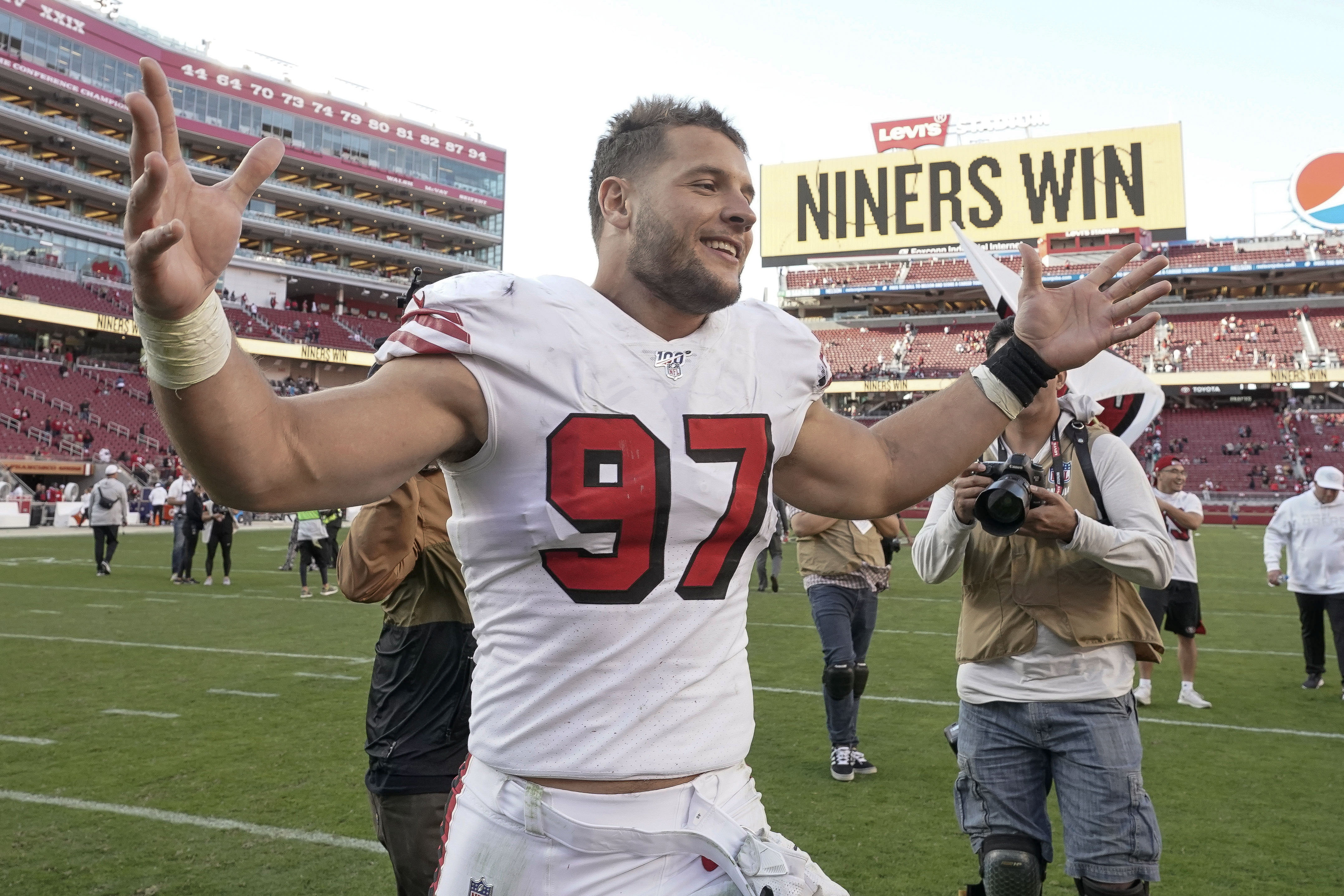 Bosa’s return to form is another reason NFC West quarterbacks will find things to be more difficult in 2020. San Francisco’s defense was waylaid by injuries in 2020, and the torn ACL that limited Bosa to just 68 snaps in his second NFL season was perhaps the most damaging of all. Bosa ranked second on our list of edge defenders after his rookie campaign, which is unusual — generally speaking, rookie pass-rushers have to come to terms with their relatively limited array of technique, as well as the quality of NFL blockers. But Bosa hit the ground running from his first game, and kept it up all the way through Super Bowl LIV, where he put up an MVP-caliber performance. The 49ers obviously missed Bosa’s presence last season — not to mention his 14 sacks, 20 quarterback hits, and 68 quarterback hurries — and a return to form would obviously do a lot to help Kyle Shanahan’s team become postseason contenders again. 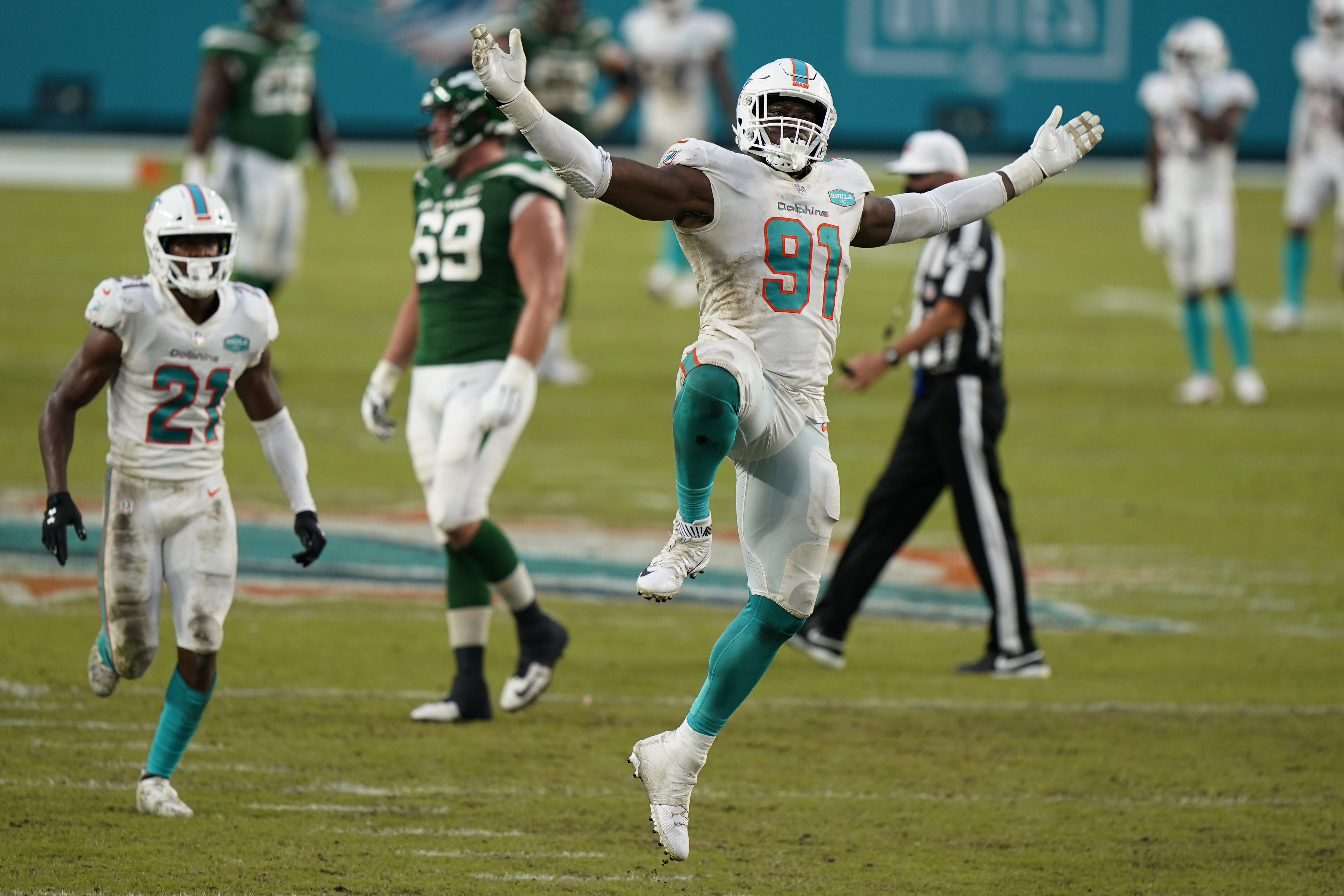 Through the first four years of his NFL career — three with the Browns, and one with the Chiefs — Ogbah was more of a rotational end than a superstar, totaling 125 total pressures over those four years. Then, he signed a two-year, $15 million contract with the Dolphins before the 2020 season, and all heck broke loose when Ogbah was tasked to get after the quarterback in Brian Flores’s and Josh Boyer’s defense. With 10 sacks, 12 quarterback hits, and 44 quarterback pressures, Ogbah was all of a sudden one of the most disruptive edge defenders in the NFL. Patriots right guard Shaq Mason, who couldn’t keep up with Ogbah on this sack of Cam Newton, would probably concur. 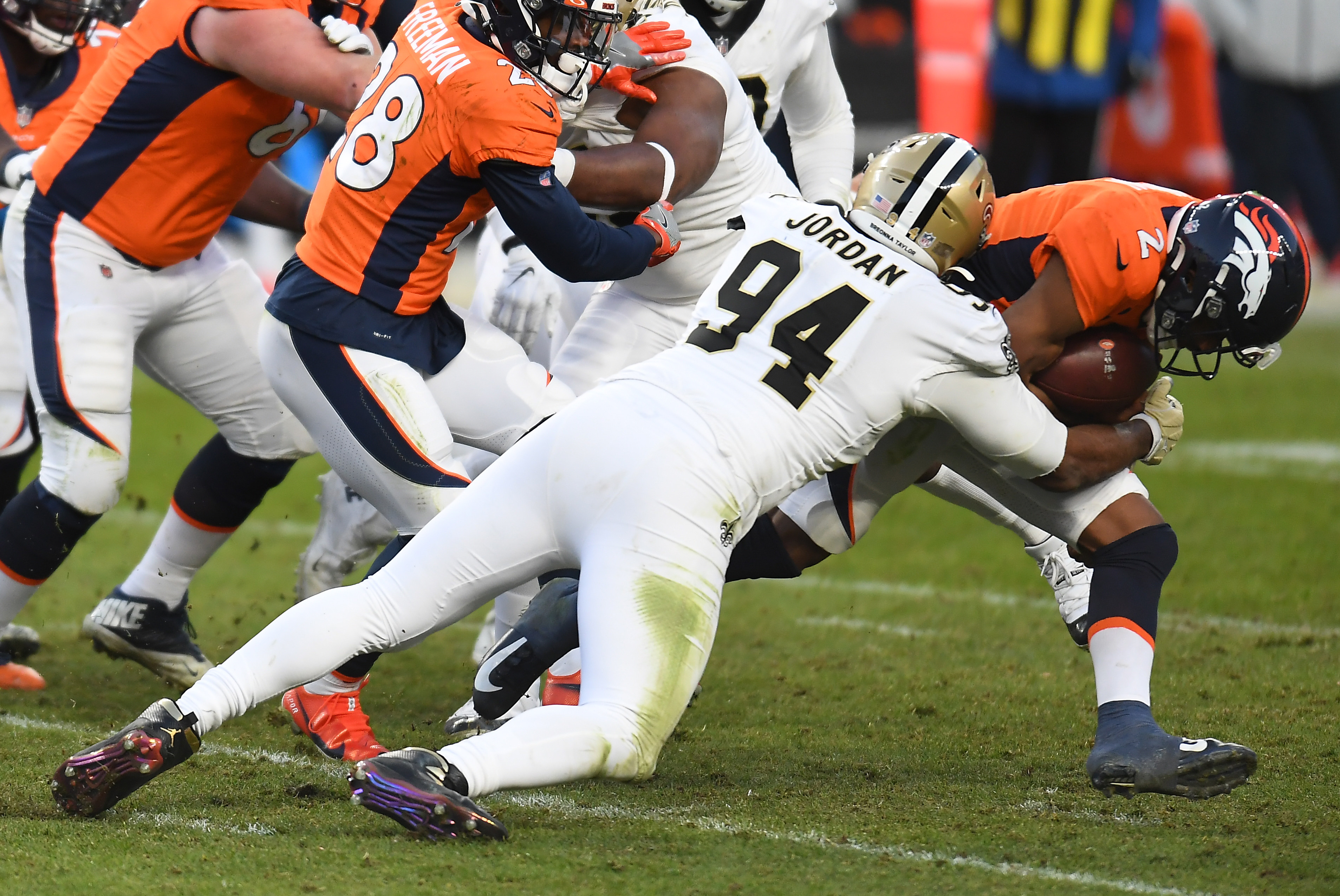 One of the most consistently effective pass-rushers of his generation, Jordan — who was selected by the Saints in the first round of the 2011 draft — has amassed at least 70 total pressures every season from 2015 through 2019. 2020 saw a slight downturn in total pressure with 61 (eight sacks, nine quarterback hits, and 44 quarterback hurries), but that doesn’t mean Jordan was any less available to provide pressure. Often, it meant that he was the one on New Orleans’ line who was double-teamed to that others could get to the quarterback. And even then, as was the case in his three-sack game against the Falcons in Week 11, double-teaming Jordan didn’t work very well, either.

Sometimes, Cameron Jordan will work your guard inside for the sack.

Sometimes, Cameron Jordan will work your tackle outside for the sack.

Sometimes, Cameron Jordan will do both in the same play. pic.twitter.com/cNGcFyr92w 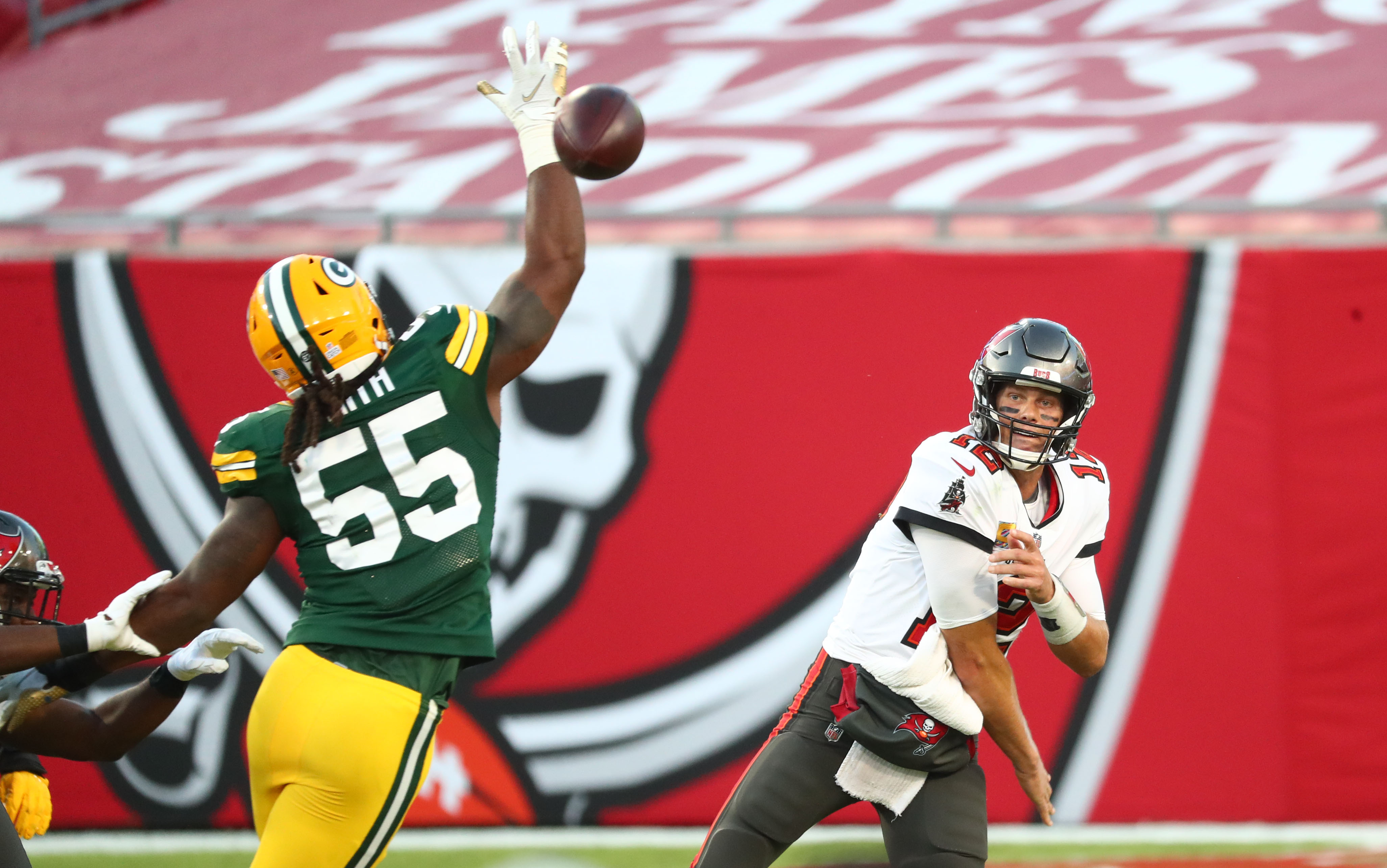 Injuries limited Smith’s effectiveness to a degree in 2020, which is the only reason he didn’t repeat his role as our top edge defender. In 2019, Smith led the NFL with 105 total pressures, the most by any edge defender since Von Miller matched that total in 2015. He didn’t quite match that last season, but he still amassed 59 total pressures, splitting it up with 14 sacks, 14 quarterback hits, and 31 quarterback hurries, and if he’s completely healthy in 2021, Smith has the strength, quickness, and impressive gap versatility to confound enemy blockers as well as any edge defender in the game.

When you have Za’Darius Smith and Kenny Clark on the same defensive line, you can do a lot to mess with protections pre-snap. pic.twitter.com/fFgS8WB9Ny 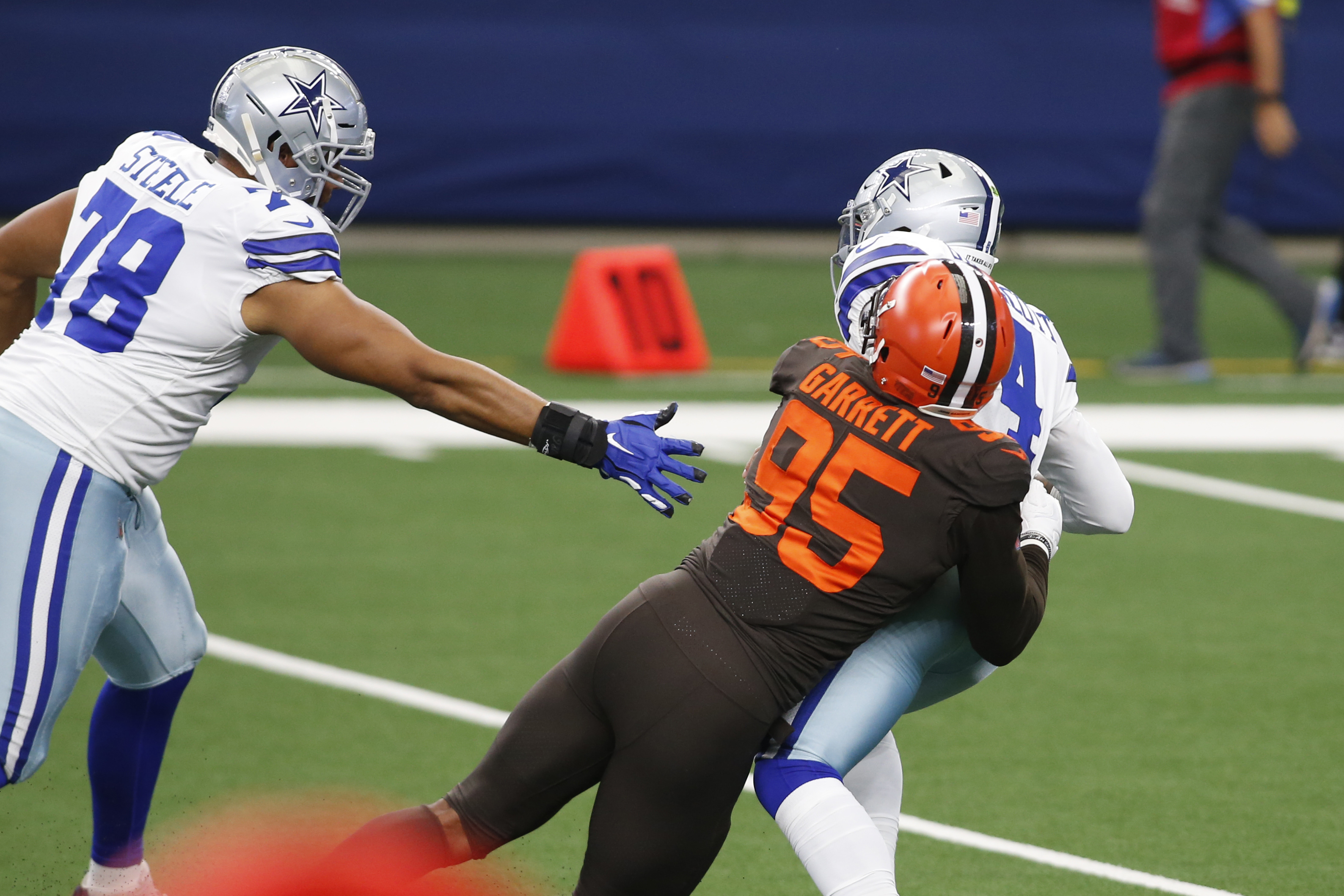 Garrett, who had 14 sacks, eight quarterback hits, and 41 quarterback pressures in the 2020 season, presents a unique problem for opposing blockers. Generally speaking, pass-rushers with his quickness and ability to bend the edge are 20 to 30 pounds lighter, and guys who can just bull a tackle out of the way aren’t as quick to the quarterback as he is. Perhaps no other edge defender comes to the field with such a total package of skills, and it wouldn’t be a surprise to see Garrett at the top of this list in a year or two.

If you have a 6-foot-4, 272-pound edge defender who can mirror Von Miller’s dip-and-rip, you might have Myles Garrett. pic.twitter.com/YT3b6MJoUz 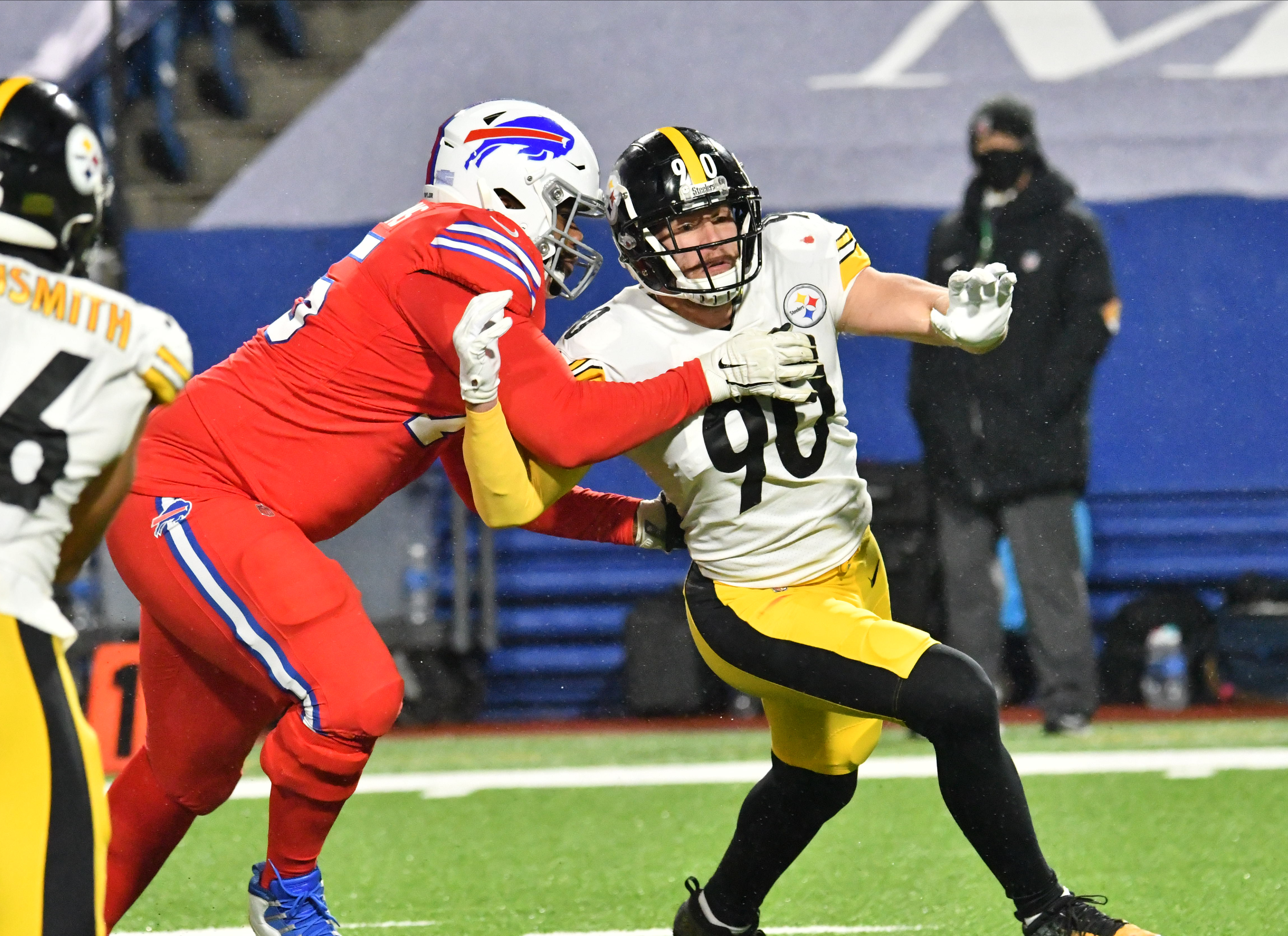 If you’ve watched Watt burn off the edge over the last few seasons, it should come as little surprise that he was the most productive pass-rusher as a 9-technique end — the speed-rusher who aligns not only outside the tackle, but also the tight end. Your average 9-tech end is tasked to get past the tackle, who has to adjust to his placement, and just blow right by his blocker. Last season, both Cleveland’s Myles Garrett and Detroit’s Romeo Okwara both had 10 sacks from the “wide-9” alignment — one more than Watt’s nine — but nobody had more total pressures as a 9-tech than Watt’s 59. Both Garrett and Okwara had 41.

Against the Colts in Week 16, you can see Watt adjust his alignment when tight end Jack Doyle motions outside right tackle Chaz Green. Doyle isn’t staying in to block, which means that Green has to deal with Watt one-on-one with no help. Probably a bad idea in general. Watt sacks Philip Rivers, Rivers fumbles, and cornerback Mike Holton returns the ball to the Indianapolis three-yard line. Overall, Watt had 75 total pressures — 15 sacks, 27 quarterback hits, and 33 quarterback hurries — and nobody was more consistently dangerous off the edge in 2020.

“Oh, there’s T.J. Watt outside? Aligning further outside after we motion the tight end to that side? Yeah, we’re still hosed.” pic.twitter.com/dqOwbHUlDk 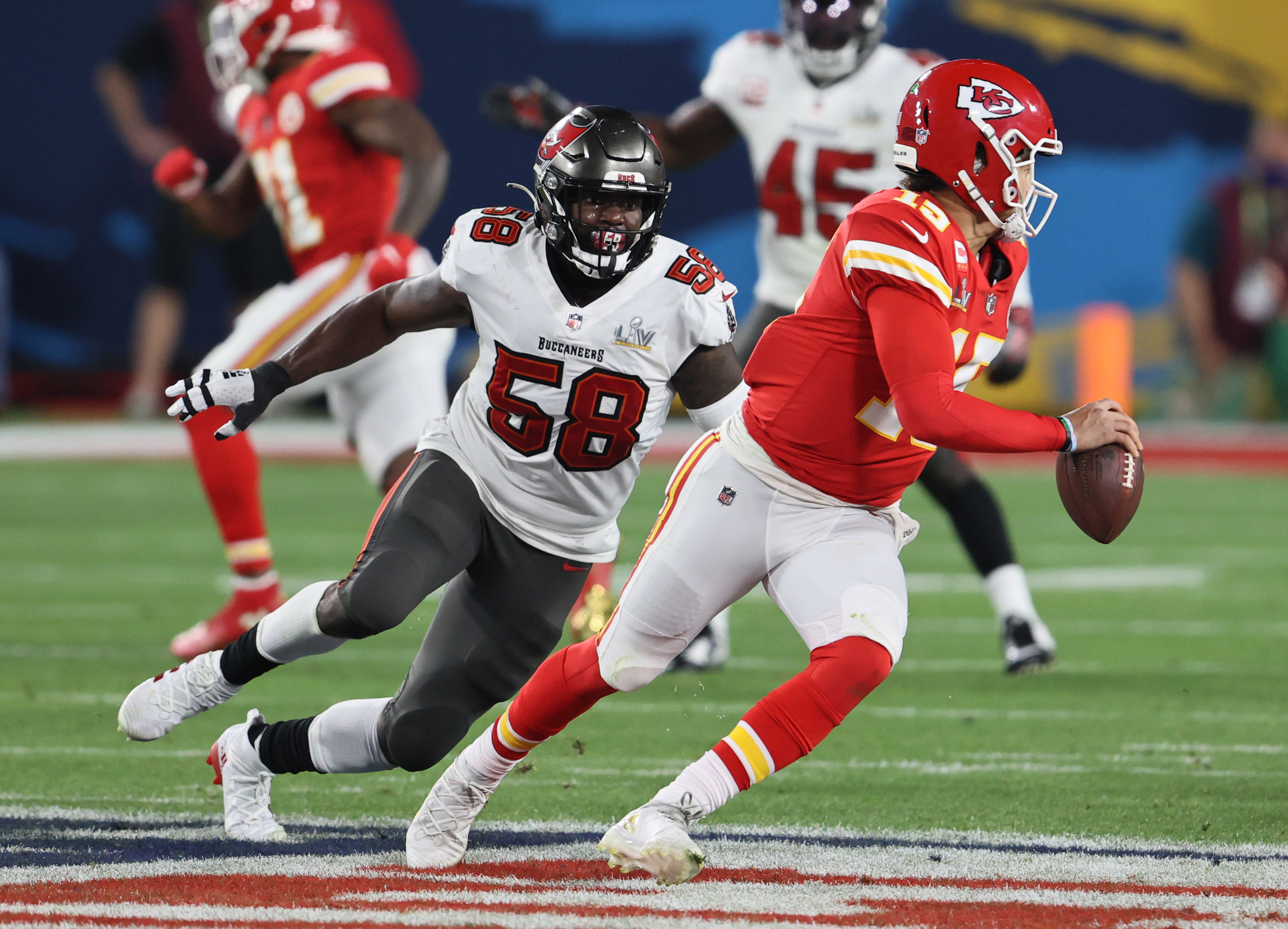 Including the postseason, only Aaron Donald had more total pressures than Barrett’s 98, and it wasn’t that close — T.J. Watt finished third with 75. And in the Buccaneers’ postseason Super Bowl run, no defensive player accounted for more pressures than Barrett’s 21. Barrett was a great player during the regular season, but he became transcendent when things got really important. My Touchdown Wire colleague Mark Schofield made the case that Barrett should have been the MVP of Super Bowl LV, and the tape confirms the assertion.

With a full array of pass-rushing moves, and the ability to get to the quarterback as consistently as anyone in the NFL, Barrett rose to our top edge defender coming into the 2021 season.

Shaquil Barrett is as good as anyone in the NFL at converting speed to power. Over and over. pic.twitter.com/RXszdJaTm5

Stephen White, who played defensive end for the Bucs from 1996 through 2001, agreed with this analysis.

Yessuhhhh. He has the total package of pass rush moves, too. https://t.co/A6V2cJnQx0