Hussle, who also had African roots – his father came from Eritrea – was deeply admired not only for his music, but for his embrace of community needs, be it schools, inner city neighborhoods or trying to curb gang violence, and for his inspirational insight.

Sadly, two years ago he was murdered in the parking lot of the clothing store he owned in South Los Angeles. His passing drew tributes from athletes across the NBA and NFL, as well as from people like John Legend, Drake, Rihanna, Beyonce and Barack and Michelle Obama. His funeral procession through South Los Angeles stretched over 25 miles long, traversing streets lined with people who mourned him.

The city renamed the intersection by his store: Ermias “Nipsey Hussle” Ashgedom Square.

Mustafa told how Hussle had talked about starting his own store and had said, basically, “If I can do it, you can do it.”

Although Mustafa said he and Herbert took that to heart when contemplating their own venture, the possibility would once have seemed far-fetched for him.

When he was 12, his family fled the Civil War in Libya and moved for a few months to Sudan – where his parents were originally from – and then to a refugee camp in Egypt for 18 months. They eventually came to the United States – the Tampa area – and after two years made their way to Dayton where his mother had relatives.

He ended up at Belmont, a magnate for international students because of the school’s ESL (English as a Second Language) curriculum. After a while he gravitated to the soccer team, where Herbert had become the captain of the United Nations like squad.

The roster included students from 18 nations and four continents. There were mostly boys, a couple of girls, Christians, Muslims, black, brown and white kids.

“All of the soccer crew, we were real cool on the field and off,” Herbert said. “We were friends. The soccer ball brings everybody together.”

They were coached by Julie Raiff, a former University of Dayton athlete, who wasn’t your typical clipboard-and-whistle type of leader.

She nurtured her players, protected them, prodded them and scolded them if need be.

“She was great,” said Herbert “She believed in us…a lot.” 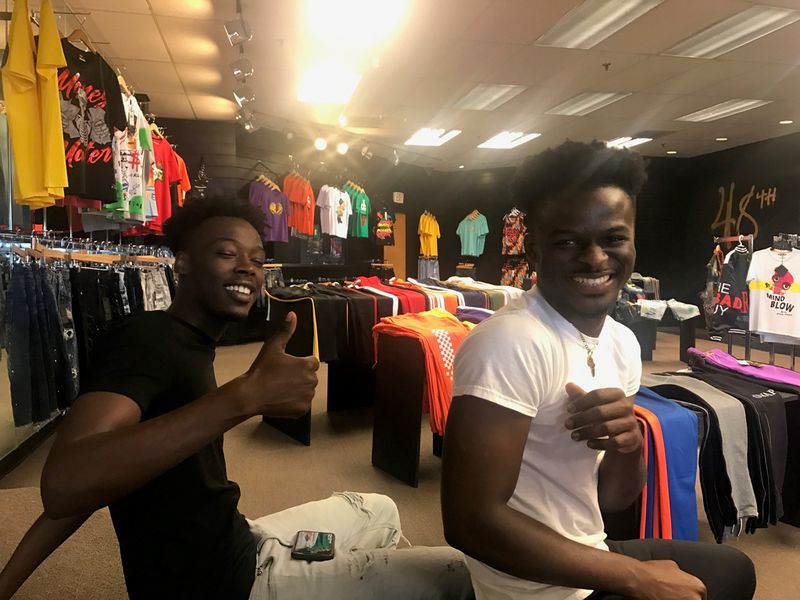 While she showed her players respect and kindness and love as they navigated their early years in America, Raiff – who now teaches special education classes and coaches tennis at Northridge – admitted they were guiding her, as well.

“Honest to God, one of the best lessons I’ve ever received in my life was having the opportunity to coach them,” she said Friday evening. “They taught me a lot.”

In turn, she said she told them soccer would aid them in their coming lives:

“We always said these are skills and traits and characteristics that you can take all through your life.

“And I think Herbert and Mustafa are showing that now. They were successful on the soccer field and now they’re working hard to be successful Americans. I’m so proud of them and love them and couldn’t be happier for both of them.”

Growing up in Africa, they both had a fantastical views of America.

Mustafa said his vision of the U.S. came from “movies, the WWE and rappers like Lil Wayne.”

It was similar for Herbert: “America was the ultimate dream for me back then, but when I was a kid I was kind of naive about the whole U.S. thing. I thought when you came here you drove around in limousines and Lamborghinis and everything was free.”

He laughed and shook his head at those far-fetched, little boy dreams:

“Nothing’s for free. Here it’s really about hard work and not giving up.”

In the beginning, though, that was sometimes easier said than done.

“When I got here I was super nervous,” Herbert said. “I didn’t know what to expect. I came in knowing nothing. It was almost like restarting life from the ground, restarting from zero. Everything was different – the weather, the food, the language, the clothing, the way of life.”

He said his best compass was his parents:

“I have great parents. They always made sure when I was misled that they brought me back on the right path.”

Mustafa said his parents continue to nudge him: “They still want me to go to college.” 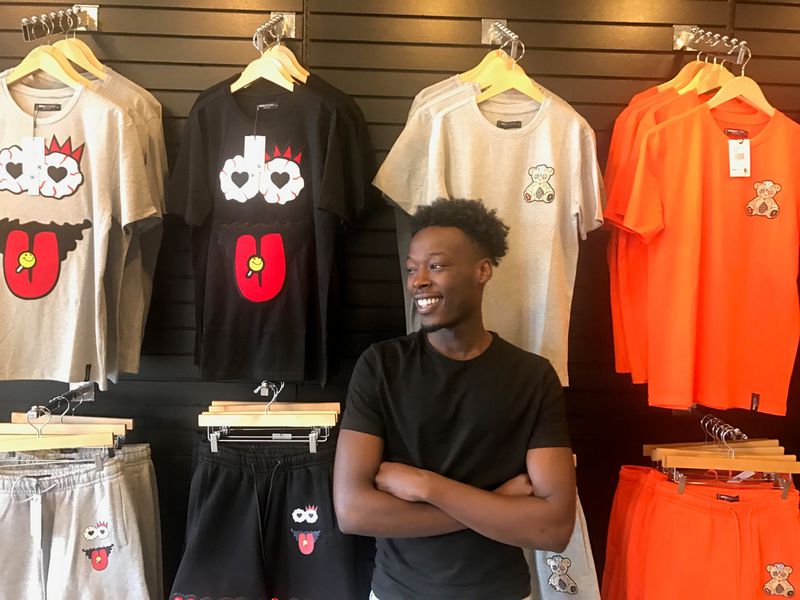 Raiff commended the parents of many of her former players:

“Many were people who came to this country when their own country was in distress, when it wasn’t safe. With some of their families, their fathers lost really good jobs and they came over here and worked as janitors to support everyone. That’s where the kids learned about working hard.”

Herbert, who’s 22, and Mustafa, who’s 23, certainly had to work to turn their dream into reality.

“We thought about this in high school, but when we graduated we weren’t living the best life and we didn’t have the best money,” Herbert said. “We both just tried to figure out ways to make money and make ourselves better people.”

For a while both took classes at Sinclair and worked at the Mahle factory on Webster Street.

While Herbert moved on to other factory and warehouse jobs, Mustafa said: “I began flipping cars, selling Kia Optimas and Subarus and cars like that. And I saved my money because we always had a plan to open a business or something.”

Both had an interest in clothes Herbert said:

“One of the things I liked, Mustafa always knew how to dress. And then about three years ago, I sat down and designed my first clothes.”

Soon he was developing his own clothing brand – Chongwain – which he describes as luxury lounge wear and casual wear, much of it designed so far toward winter. (For a better idea go to www.chongwain.com). 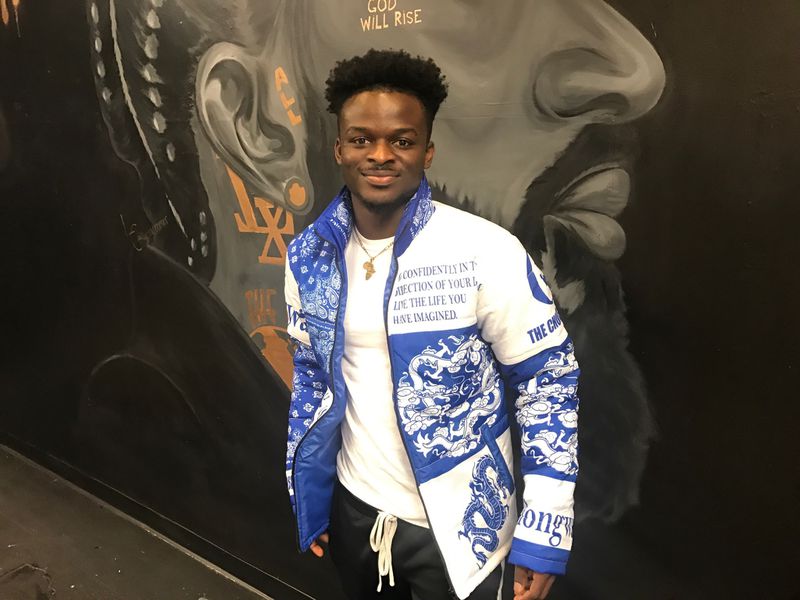 Herbert Chongwain models one of the winter jackets he’s designed in his Chongwain collection. Tom Archdeacon/STAFF

“At first, I thought, ‘What if we design our own clothes and sell them?’” Herbert said. “But then Mustafa came up with the idea that it would be easier to have a store and sell clothes retail.”

Mustafa said he was guided then by Hussle, who had come up with innovative ways to market and distribute his mixtapes, as well as launch his own clothing business.

In one of the interviews Mustafa heard, the rapper talked about a book that had become something of a Bible to him – “Contagious: Why Things Catch On” by Jonah Berger.

“I ordered it and it came to my house and I read it,” Mustafa said. “It taught you how to be a different kind of businessman and that made it easier for me. That helped me see things differently.”

While Herbert has a knack for designing clothes, Mustafa showed an ability to conceptualize their clothing store.

“He read the book, I didn’t,” Herbert said. “In my head it would just be a store with clothes. I never thought of the designs. Mustafa’s ideas surprised me. He said this will be here and that will be there. He pictured it all.”

The pair eventually found vendors who would sell to them and they visited other stores to see how they did business.

Mustafa thought they should pay tribute to Hussle and they got Lycia Cromer, a Miami Valley School grad who’s a student at the Art Academy of Cincinnati, to make the stunning mural that fills one wall of their store.

And they also printed one of Hussle’s inspirational thoughts across their entire front counter.

But then came the real challenge.

The needed to come up with a name for the store.

“Me and Herbert were driving around, trying to think of a store name,” Mustafa said. “The first day we didn’t come up with nothing. Then the second day – nothing.”

He said that’s when Herbert called his older sister, Christelle.

“He told her the trouble we were having and she asked him, ‘How long y’all been thinking?’ He said, ‘Since yesterday. It’s been 48 hours and we’ve come up with nothing.’

That’s how 48th Clothing came to be.

The grand opening was April 24th. They started with limited stock and have continued to grow until their store is now filled with several popular brands. 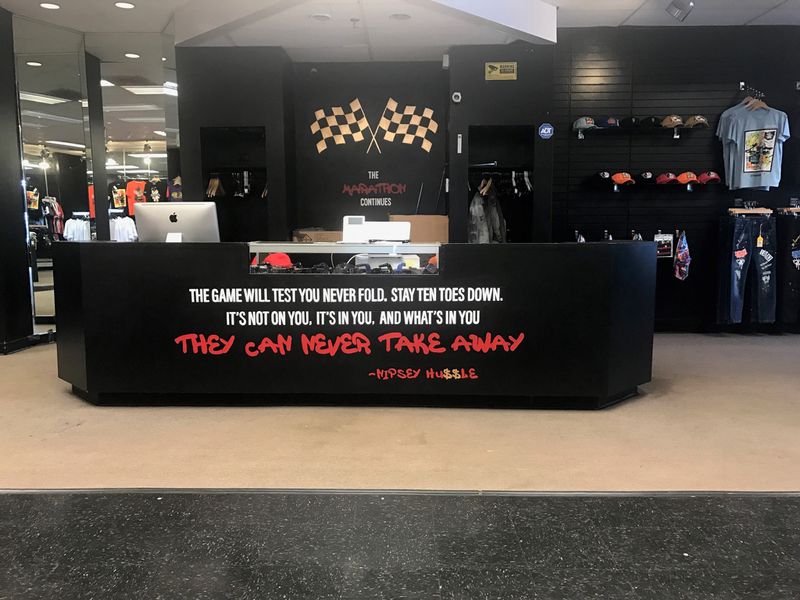 One of the inspirational sayings of Nipsey Hussle is highlighted on the on the counter of the stylish 48th Clothing store in the Northwest Plaza. Tom Archdeacon/STAFF

“Nothing comes easy,” Herbert said. “We’ve had sleepless nights and stressful days, but we’ve come to realize the only time you lose is if you quit completely.

“You just have to realize there are going to be ups and downs. Sometimes you have a bad day, but it’s not a bad business.

“We jumped into this with a lot of faith and we’re putting in all the effort. You have to treat it like a baby and grow it and guide it and eventually it will pay off.

“Actually, this is just the starting point for us. We’ll grow our business and our (Chongwain) brand and we’ll use it for good.”

“And there’s a girl with a store two doors down from us here. We talked to her about giving back to the community with like a back-to-school drive.”

As Herbert put it: “It’s not about just giving somebody a free shirt when they walk in. We want to make a difference in this community. We’ve been blessed.

He may not have read the book, but he gets that Hussle message written boldly across the front counter:

“The game will test you, never fold. Stay ten toes down. It’s not on you. It’s in you. And what’s in you. They can never take (that) away.”