This story originally appeared in the summer 2021 issue of Everyday Champions magazine. You can read the entire issue here.

If you like a good “chicken or the egg” dilemma, try this one: Do players make a program great or does a program make great players?

When it comes to the Georgia Tech women’s tennis program, the answer is probably just “Yes.”

There’s no question about Georgia Tech’s place among the elite programs in the country. They established that place in the 2000s, winning four ACC Championships (2005-07, 2010) and a national title (2007) under Bryan Shelton. Tech has sustained it during the Rodney Harmon Era, which began in 2013 and has seen the Jackets reach the Sweet 16 in four of the last five seasons (there was no NCAA Tournament last year) and get to the national semifinals in 2019 while winning at a gaudy .673 clip (165-80), .704 (81-34) within the rugged ACC.

Under Harmon, Tech has sent five players (accounting for nine berths) to the NCAAs and six doubles teams (making seven appearances) — including two teams this year (junior Gia Cohen and freshman Ava Hrastar, as well as seniors Kenya Jones and Victoria Flores), the second time Tech has sent two teams since 2018 (Paige Hourigan/Jones and Rasheeda McAdoo/Johnnise Renaud). Two of his doubles teams hit No. 1 nationally, Hourigan and Jones in 2018, and Jones and Flores in 2021. Tech has had 17 All-ACC selections — seven first-teamers — and four ITA All-Americans (depending on publication and ITA release this year, this number may change).

Jones, whose 121 career doubles wins are the most in program history (her .776 winning percentage ranks second to Hourigan’s .793), and Flores, who ranks fourth in program doubles winning percentage (.705, 79-33), can probably speak best on Harmon’s system and the success it creates. Over the past two years — plus one match in 2018, which they won — they compiled a 42-6 record, an .875 winning percentage, and a No. 3 national ranking as they entered the 2021 NCAA Championships. Both also made it to NCAA singles, with Jones ranked No. 5 and Flores in the 9-16 seeding.

All this success is the result of Harmon’s process, honed in a lifetime of player development, including two stints with the United States Tennis Association, the latter as coach of the U.S. men’s team at the 2008 Beijing Olympics.

“Player development is really the key to what we do,” he said. “The biggest thing has been the idea of the players understanding that you have to play the right way. We train you for the long term, trying to give you the most mechanically efficient swing and also make sure you understand tactics. I tell the girls, ‘You’re supposed to come forward on a certain ball. If you come forward and miss it, blame me. That’s fine.’ I don’t care if you miss a point, sometimes you may lose a match. It’s okay. Because if you do the right thing enough times, you can’t do the wrong thing. Once you get used to doing things the right way your instincts take over.” 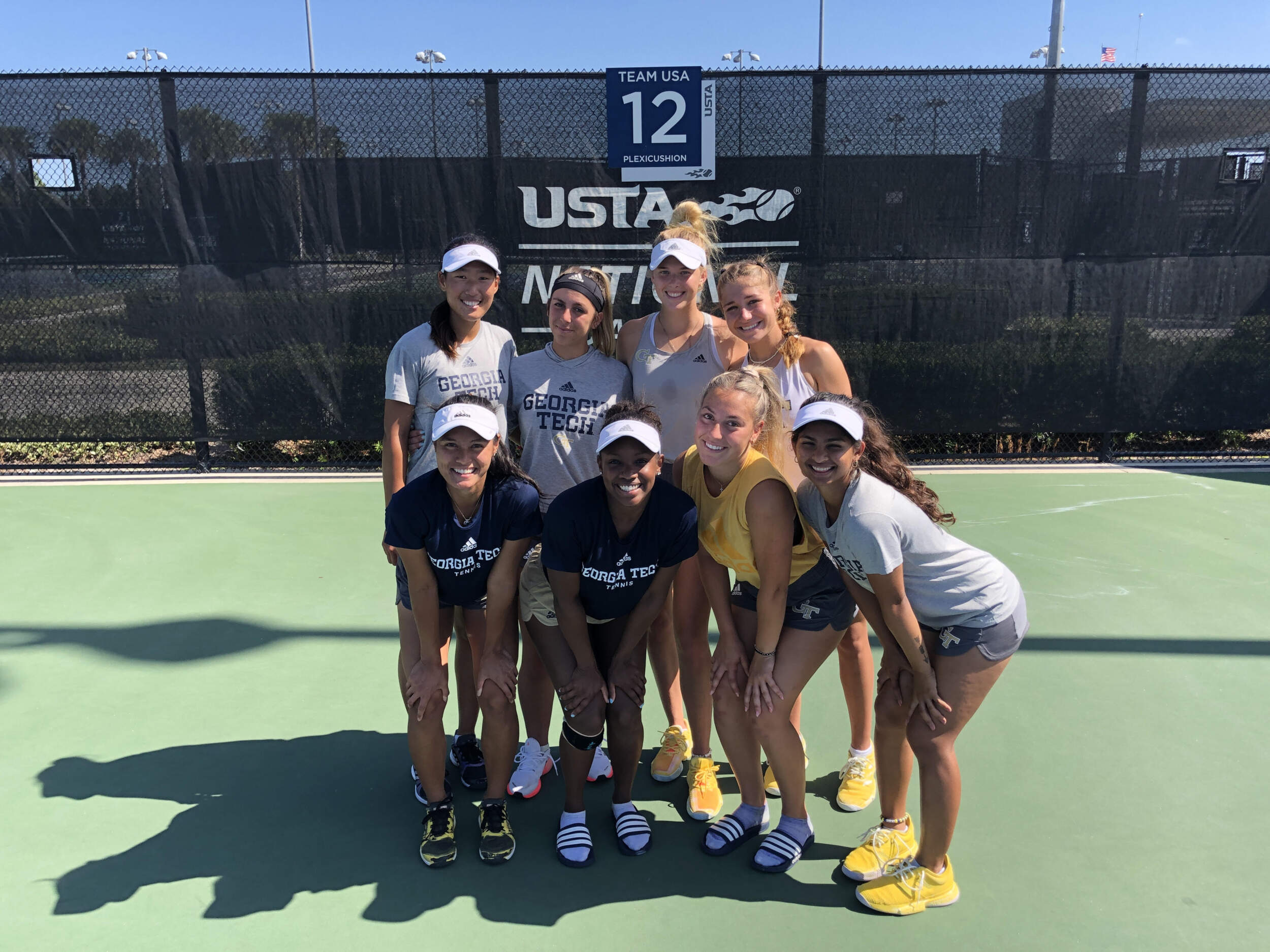 “They’ll never pressure you to win. They genuinely develop you in a way that makes your game the best it can be, which then gives you the best chance to win for the team,” said Flores. “Rodney told me, ‘You can be a good doubles player if you learn certain patterns that work for you, and you stick to them and you don’t stray from them.’ That is where we grew, because we gained so much confidence from doing the same similar patterns over and over again.”

It works in singles as well.

“We talk about how we continue to develop people who can play in the No. 1 spot, because I played 4 my freshman year,” said Jones, who finished 122-53 in singles, 36-19 the last two years playing at 1. “When I got here, I had a lot of things that I needed to work on and develop technique-wise, and even strategy-wise, within my game. Rodney knows what each player needs to work on even before they get here. I think it starts within the recruiting process. He told me the things that he was going to work on with me in my game. It’s just him having a clear and concise idea of exactly everything that he wants to focus on in your game.”

That may mean hearing him a lot and, more important, not tuning him out. What’s a concern for some coaches is something Harmon can joke about.

“I’m sure the girls are tired of hearing from me about each of the things in their game they need to work on,” he said with a laugh. “Player development is the bedrock of what we do. That is my thing. That is the thing I live and die for.”

“I like to understand certain ways you’re supposed to hit a ball or different strategies or something about technique. I really like to know exactly what I’m doing on the court,” said Flores, a self-described “tennis nerd.” “I might hear things Rodney tells me on the court that, when I was a freshman, I didn’t understand. So it’s kind of cool, because I can see the progression of something I didn’t do before. It can be a little repetitive. But if he’s repeating himself, it clearly means you have to work on something.” 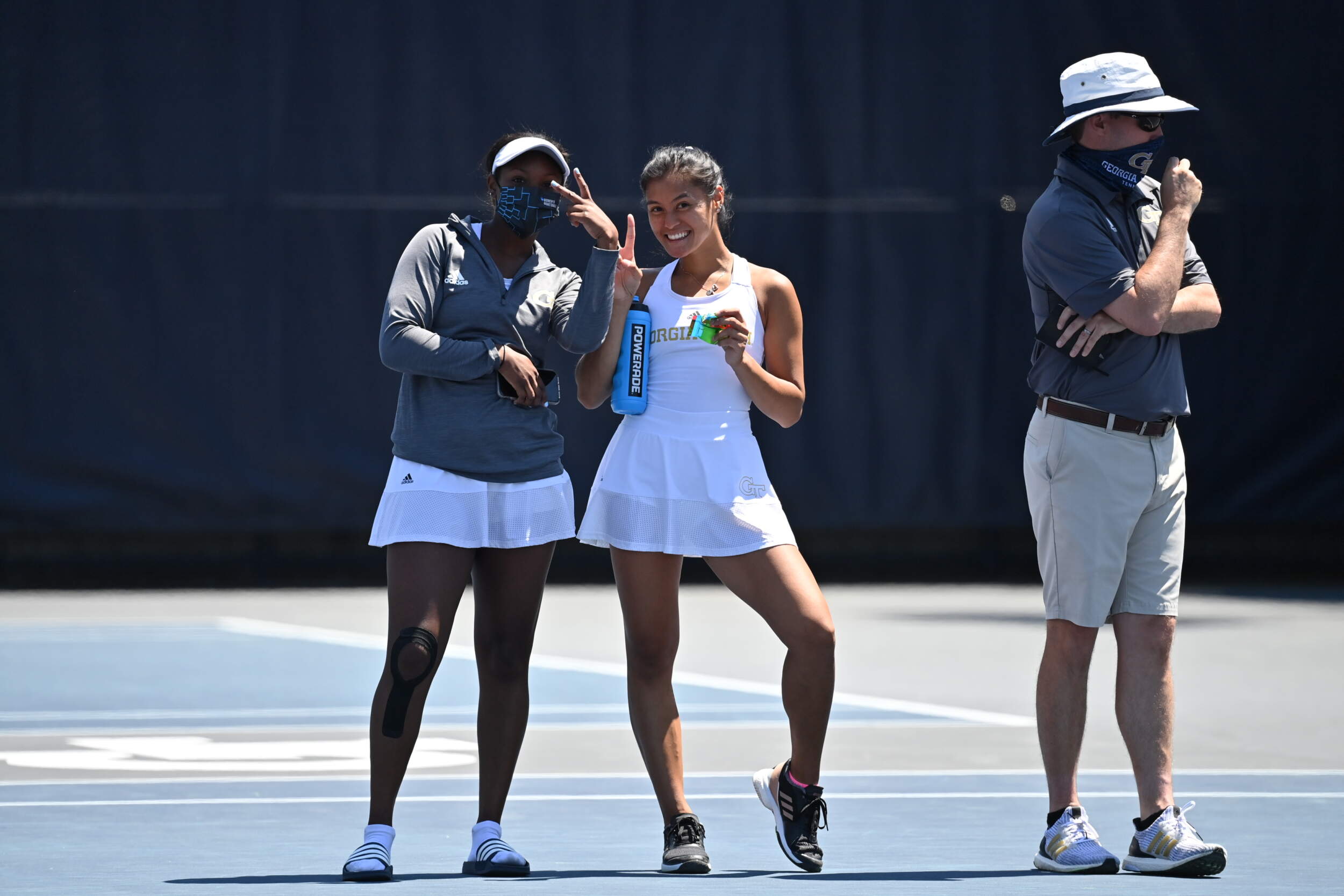 One way the team avoids forgetting what they’ve just worked on is by writing things down in a notebook Harmon requires.

“That has helped mature me not only as a player, but as a person,” said Flores. “I love to journal. I do that as part of my daily routine in the morning, so transferring that to tennis creates real goals for the day or for practice or for the next few weeks, noting the good things you’re working on and things you feel like you need to work on more, studying specific strategies of players that you’ve played in the past, those things are so important.

“I actually did (look back on my freshman journal),” she added. “The difference from now and then, it was so cluttered and not organized, because everybody wants to accomplish so many things in practice, like 10 things. Rodney’s like, ‘That’s not possible. The more that you focus on a couple of things and do them well, then you can move on to the other things.’”

Part of the reason Flores’ freshman notebook probably was so full was because Harmon has players make a lot of fundamental changes in their first year as part of a four-year plan.

“Stroke changes and adjustments need to happen really in your first year,” he said. “In your second year you are continuing to refine those things while looking at things that you do well and identifying patterns of play that you need to execute at a very high level. Then your third and fourth year is playing against different level types of players, getting bigger, getting stronger, and learning to compete better. At that stage you already have all the tools that you need to play at a high level.”

“He actually changed my serve my freshman year,” Jones recalled. ‘I toss the ball differently than most people do, so he changed my serve. I had a period where I started the racket on my shoulder. That’s how I served, just so that I could kind of learn the correct technique and motion all over again to help develop me into a full-service motion. Coming into college, my serve was my weakest shot. I cannot say that now.” 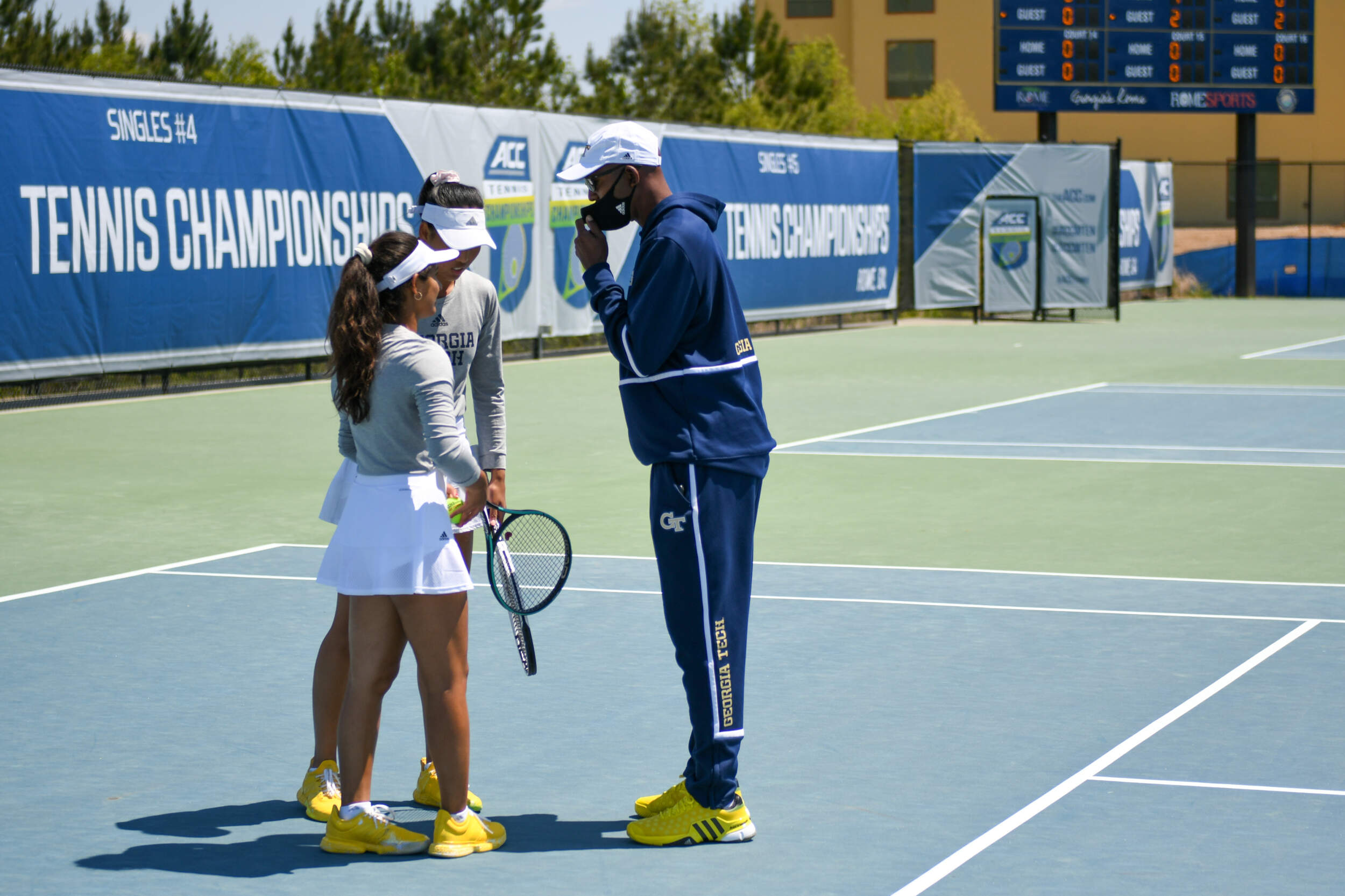 Freshman Carol Lee is the latest example of a player experiencing success following an overhaul of her forehand, which had jokingly been referred to as “The Propeller.”

“(The coaches) gave me the nickname for my forehand, because it was really big, and my swing was really back and that didn’t help me with my shots,” she said. “Now it’s more stable. My swing is smaller, and it gives me more strength, using my legs and my rotation. I put in more work, and we found multiple solutions in order for me to feel comfortable and to give me more confidence. It was a long process.”

Long but fruitful, as down the stretch, Lee was 7-2 and led in all three NCAA Tournament matches although they’d resulted in DNFs (“did not finish”).

First-year moves don’t always work right away, but will over time.

“Most people improve a lot in their first year. I was actually the opposite, because I just really struggled with school,” Flores said. “But I was able to learn so much from my freshman year that Rodney and our coaches were able to develop certain plans or goals that were specific to what had happened that first year. Everybody asks me, ‘What would you tell your freshman self?’ I would say, ‘Everything will be okay.’”

The seniors, who have gone through the system, helping the freshmen, who are beginning it, also has become a tradition. Flores remembers how McAdoo and Renaud helped her and saw those lessons repeat themselves in practices all season long.

“It gave me flashbacks,” said Jones. “Sometimes Vicky and I would chime in and kind of help the girls — repeat some of the stuff that the coaches have said to us the same way that Paige and Johnnise, who were seniors with us, did. It makes me feel a little old sometimes, but it’s a good feeling.”

“I get that almost every single day at practice,” agreed Flores. “It’s really exciting that we can help them in that way.”

What tweaks Harmon and his staff don’t see with the naked eye, they can spot with Dartfish, a program that allows coaches to video a player’s practice then analyze it on TV, going through the session, even isolating aspects frame-by-frame.

The program was implemented in 2019 and proved to be a game-changer for Flores.

“That’s when I started to truly watch my matches on video, because I had never done that,” she said. “That’s really important because Rodney and Austin would help me look at each point, how to play certain shots. Austin (Roebuck) could personally chart each match. He could give specifics: how many unforced errors you made, or how many times you went wide on the deuce side, and (how many times) you won the point with a forehand as the first ball. Going that specific with the resources that they gave us was one of the elements that truly helped me and helped the entire team.”

The names will change — that’s the nature of college sports. But don’t expect Harmon’s system to. Or the success it breeds.

“All four freshmen have so much potential,” said Flores. “I think in the future, our doubles will improve even more because they’ll learn the way Kenya and I have learned.”